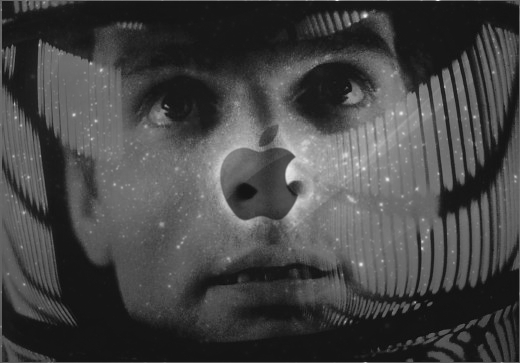 Apple’s patent infringement case(s) veered off in a new direction this week as Samsung started to clutch at the most eloborate of straws. As they continue to try and hold up a defence against the accusations we can only guess that the Korean firm enlisted the help some SciFi mega-geeks for their latest counter-claims.

Of the nine global legal battles that involved the two, one in the District Court for the Northern District of California involving four alleged breaches of patent is where the scene is set. Now if we tell you that the latest filing by Samsung involves Stanley Kubrick’s 2001: A Space Odyssey, you may go all WTF on us. Stay with it though. It’s worth it in the end.

Anyone that remembers the 1968 epic may have noticed two guys chowing down on some food whilst watching something on what appears to be the creation of Steve Jobs and co. The clip below shows what Samsung is on about:

With the clip, the brief reads that the tablet in the clip “has an overall rectangular shape with a dominant display screen, narrow borders, a predominately flat front surface, a flat back surface (which is evident because the tablets are lying flat on the table’s surface), and a thin form factor”.

They also claim that a tablet similar to the iPad was also present in a 70s edition of British show The Tomorrow People. After discovering the filing, patents expert Florian Mueller commented, “It would be amazing if the court agreed with Samsung that this constitutes prior art for that particular iPad-related design patent. Whether or not Samsung will succeed, the mere fact that they proffer this kind of evidence is remarkable.”

This case verged on the ridiculous when it was first filed thanks to the fact that Apple is basically going after Samsung for a number of things including the shape of the Galaxy products – something that is synonymous with almost all tablets. Samsung may well be taking the piss here. Let them do it though. We do have to thank Apple as well. If this case hadn’t been filed we’d never have seen the filing from Samsung.