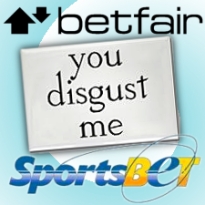 Australian gaming analysts expect only modest growth from Aussie gambling outfits this reporting quarter. Morningstar’s Ross MacMillan told the Australian Associated Press that gaming sector earnings growth would be “very subdued … if we see any at all.” Fat Prophets analyst Greg Fraser figures gaming revenue will have fallen in tandem with tightened consumer spending. Companies will be looking to cut costs, a situation that won’t bode well for near future growth.

Then again, maybe pushing for growth isn’t the best strategy right this second. Sportsbet.com.au CEO Cormac Berry just got yelled at by Australian senators for his attempts to boost business at his online betting company. Speaking to a Parliamentary inquiry into interactive and online gambling, Berry related how Sportsbet paid $3-4m annually to affiliates (big and small). So what, we hear you say? Seems Sportsbet neglected to inform new bettors that these affiliates were making a commission off the punters’ wagers, which may put Sportsbet in breach of secret commissions legislation in certain states. Betfair also admitted to the use of affiliates, albeit on a smaller scale.

The existence of the affiliate universe appears to have come as an utter surprise to Australian politicians and major media outlets. Sen. Nick Xenophon, a tireless campaigner against gambling in any form, called the affiliate business “unconscionable” and a “pretty sick business model.” Xenophon painted a picture of pimp-like affiliates turning their friends out and “sponging off your losses.” Xenophon plans to amend his pending online gambling legislation to ban betting commissions. Yes, it’s been a shite month for Sportsbet, coming just after they were lambasted for attempting to sell a punter’s house (and evict his mother) to make good on the $80k credit they’d advanced (and he’d lost).

Betfair is also not having a great August. Just a week after the state of Victoria suggested implementing jail terms for match-fixing, a betting scandal has engulfed New South Wales. Harness Racing NSW may end up demanding bookmakers’ banking records following allegations that trainers were tipped off in advance which horses would be ‘swabbed’ (drug tested) in certain races. Sources have told the Sydney Morning Herald that as many as 28 punters, trainers, drivers and bookmakers have been contacted by investigators. Betfair has confirmed being among those contacted. As the scandal unfolds, a livid HRNSW CEO Sam Nati has gone all Pulp Fiction, promising to strike down upon the offenders with great vengeance and furious anger. ”This investigation is ugly and there will be fallout. They are going to lose their houses over this, some of these people.”