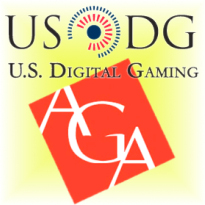 It’s become all too obvious that the US land-based casino giants are prepping for a serious push on federal online poker legislation this fall. (We feel a bit like the German army camped out in France in 1944, knowing full well that the Allies are planning to launch D-Day soon, but not knowing the exact date or time.) This week has already seen the launch of the Caesars/MGM-funded grassroots/astroturf coalition FairPlayUSA, which immediately received a big thumbs-up from the American Gaming Association.

Similarly, after FairPlayUSA laid out ’10 Principles’ that would guide their efforts to advance the land-based casino’s agenda, the AGA has now tweeted their five ‘must-haves’ for an online poker regulatory scheme they would support. The AGA’s fab five are:

1. must prevent use of online poker sites for money laundering or other illegal purposes.
2. must exclude minors.
3. must restrict access from those living in states/jurisdictions where web gambling is illegal.
4. must address problem gambling by providing tools for players to control their gambling.
5. must ensure that games are fair to players by preventing cheating by players, operators.
6. must love dogs. [oops, that’s from AGA president Frank Fahrenkopf’s dating profile on Match.com. Our bad.]

A would-be nemesis of Fahrenkopf’s federal vision is Richard Bronson, co-chairman/co-founder of US Digital Gaming. As a prominent backer of intrastate online poker, Bronson is trying to act as Lex Luthor to Fahrenkopf’s Superman. A Bronson op-ed is currently making the rounds, touting the benefits of states – in particular, California – going it alone, and in doing so, sticking it to the “Nevada partisans, who want a system that insulates the large casino resort operators along the Las Vegas Strip.”

Of course, many onlookers are convinced that neither feds nor states are going to get their act together to pass any legislation, let alone implement a workable system, anytime soon. That’s not so bad for those ‘Nevada partisans’, who at least have their land-based casinos at home and (for some) abroad to generate positive cash-flow. Unlike US Digital Gaming, which has yet to generate a single penny of revenue over its two years of existence, and won’t, until some brave state takes the plunge AND hires US Digital Gaming as their technology provider. To use a poker analogy, that’s like going all-in holding a 2-7 off-suit. As the saying goes, if you’ve been sitting at the poker table for a while (say, two years) and you still can’t figure out who the sucker is, the sucker is you.