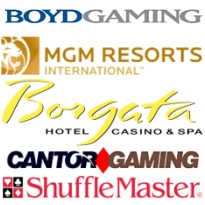 Boyd Gaming Corp. recorded a $3m loss in Q2 2011, compared to a $3.4m profit in the same period last year. Revenues were $574.4m, off 1% from the year before. Boyd blames some of the decline on the Mississippi River floods that closed its Sam’s Town Tunica casino for 25 days in May. Revenue at Boyd’s Las Vegas ‘locals’ properties fell 0.8%, while revenues at its Fremont Street properties (which cater more to tourists) rose 2.5%. Revenue was off 2.2% at Atlantic City’s Borgata Hotel & Spa, in which Boyd holds a 50% stake.

MGM Resorts international, which owns the other half of the Borgata, was recently given an additional 12 months in which to find a buyer for its share. MGM decided to walk away from its Atlantic City operations last year rather than sever ties with its far more lucrative joint venture partner in Macau, Pansy Ho, whom New Jersey casino regulators had deemed ‘unsuitable’ due to her father Stanley’s alleged ties to Asian criminal elements. MGM and the Ho clan have denied the allegations.

Cantor Gaming, makers of the eDeck mobile device that allows Las Vegas casino customers to place bets away from the casino floor, has entered into a joint licensing agreement with Shuffle Master Inc. Terms of the deal were not disclosed, but Cantor will be allowed to offer Shuffle Master games like Crazy 4 Poker and Ultimate Texas Hold ‘Em on the eDeck, while Shuffle Master gets access to Cantor’s odds wagering technology.

The Mystic Lodge casino in Henderson, Nevada has been ordered by a federal judge to change its name after the much larger Mystic Lake Casino Hotel in Minnesota objected to what it claimed was abuse of its trademarked moniker. Attorneys for Templeton Gaming Corp., owners of the Mystic Lodge, argued that nobody in their right mind would confuse their clients’ rinky dink operation with that of the much larger Indian casino in Minnesota. Mystic Lake features 600 hotel rooms, 4,000 slot machines and 100 table games, while Mystic Lodge has less than 200 slot machines and no hotel. However, US District Judge James Mahan didn’t agree, and gave Templeton 60 days to find another name. Templeton is appealing the decision.