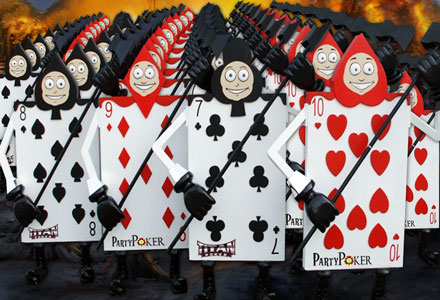 Just when you thought that the rakeback wars were over, a new one is starting. Party Poker recently made all their MTT’s “rake free” which is their way of saying that they have removed the fees. Titan Poker have countered that by decreasing the rake on some of their cash game tables by 50%. They even have a special “Rake Break” tab for those tables in their poker client.

The direct negative effect for these two poker rooms will be twofold:

2. The lowered rake itself will decrease the gross revenue.

There will also be an indirect negative effect from the worse experience the net depositing players at these rooms will get. Because of the winning players that these promotions will attract they will lose their deposits quicker than before—the lower rake will not fully compensate for that. That in turn will have a negative effect on their willingness to redeposit.

So why are Party and Titan doing this? For Titan this could be a way of ring-fencing their players from (rakeback) players belonging to other sites in the iPoker network. I have not seen this promotion on any other room in the iPoker network. Still, even viewed in that light it will only attract the wrong type of players. For Party Poker, I would assume that they are willing to try anything to stop the negative trend for their poker revenue that started more than three years ago. This will not be the cure though.

In the iPoker network model there is a system to punish operators who bring too many winning players to the network. Ongame, part of the Bwin.Party group, have an even better system which is more similar to the Bodog Network model. When I analyzed the different systems in September last year, the Ongame system is superior to the simple iPoker model.

It is interesting that Titan are now doing something that is completely against their own network policy. And the fact that Party Poker launched a “rake free” promotion only a few weeks after Ongame increased the rake with 33% on their low limit cash game tables shows that there is no common poker strategy in the Bwin.Party group—they are moving in opposite directions.