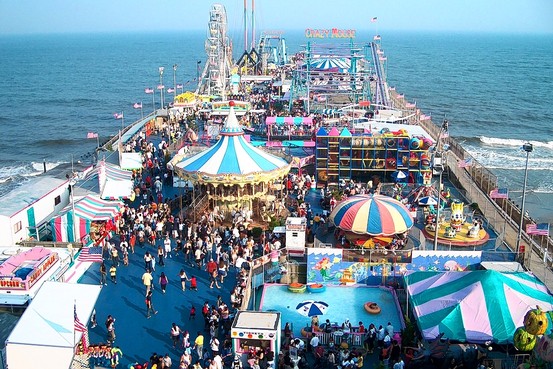 Trump Entertainment has confirmed that it will be putting one of Atlantic City’s Steel Pier amusement park up for sale. The salubrious landmark has been synonymous with the Jersey Shore since it came up from the water in 1898. Trump and Donald have gone through some hard times of late and it seems the failure to challenge for the presidency may have been the straw that broke the camel’s back.

Regarding the sale, spokesperson Brian Cahill, said, “We believe selling the Pier through auction is the best course of action for the company to increase the equity value for our shareholders,” said Brian Cahill, a spokesman for Trump Entertainment. “We are a gaming company, and Steel Pier is not part of the casino.”

The minimum bid will be $2.5m and Trump has hired CB Richard Ellis to handle the sale. Atlantic City has been struggling for some time now and so has the company itself. The Don now only owns around 5-10% of the group and it’s a long way from the days when he was synonymous with the gambling hotbed.

Meanwhile over in the desert magnificence that is Sin City, the owners of the Sahara have stopped short of selling anything that’s not bolted down. It doesn’t mean they’re not giving it all away. One of the casino’s most iconic signs, a 30-feet high camel, is being donated to the city’s Neon Museum. Chairman of the museum Bill Marion said, “the sign is a classic example of Las Vegas’ storied past and the historic art form of neon signs.”

We think it might have been slightly more impressive if they’d donated a real-life 30-foot high camel. Now that would have been something!