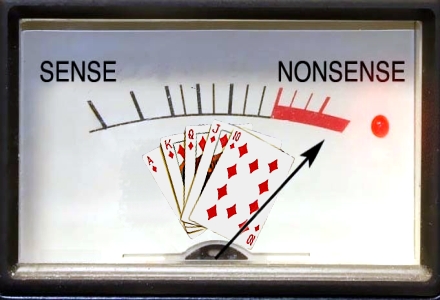 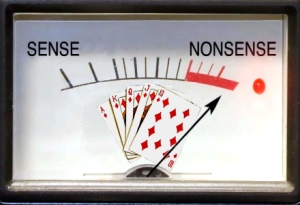 or ‘On The Dangers of Eating Prawns With Tiny Forks’

I can take it no longer.

Every man has his breaking point.

As I sit here in the lounge at Heathrow reading yet another analyst’s coverage of so-called “Black Friday”, it is all I can do to contain myself. If I must read one more blithe, off-hand declaration that “poker is a game of skill”, uttered with the same absolute conviction more commonly reserved for statements like “the sky is above the sea” or “of course I love parfaits”, I swear on all that is holy that I will stab myself in the eye with this tiny fork the hostess has kindly provided for these delicious prawns (is that cilantro?).

I can no longer stand (well, sit … recline, really) idly by listening to poker advocates fawning compliments of the Emperor’s latest fashions while his gentleman bits run the not inconsiderable risk of sunburn.

And so, while I wait for my Glenmorangie to arrive at the table (where did that waitress go?), I must take a stand, however briefly, for truth and uncommon sense.

Join the revolution, my brothers and sisters… 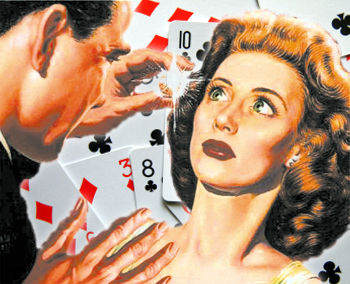 PREDOMINANT PREMISES
The argument at issue goes something like this:

Premise 1 – In the US, there is a commonly-employed legal test to determine whether an activity is “gambling”, which turns upon whether a game is “predominantly” a game of skill or “predominantly” a game of chance. If an activity is predominantly one of skill, wagering on its outcome as a participant is not gambling – it is, in effect, a contest. [Indulge me long enough to pause here briefly to state unequivocally and in the most emphatic terms that this test is NOT used universally in the United States and I must beg my colleagues to desist from thinking of a nation with fifty state regimes interacting with at least eight federal statutes as some monolithic market that can be discussed in such simplistic terms … rant over.]

Conclusion – Poker is not gambling.

I will focus on Premise 2 in this tiny manifesto, partially because it is Premise 2 that has sparked my ire, and partially the Premise 1 will take far more time to explain than I have before my boarding call. Perhaps another day.

So, let’s put aside for the moment the question of the correct legal threshold and consider the underlying question – “is poker predominantly a game of skill or predominantly a game of chance?” In response to this question, one is oft subjected to glib remarks such as the old chestnut “well, if it isn’t a game of skill, why do you see the same people at the final tables every year?”, or “maybe you should play a pro sometime”, or “money inevitably flows from bad players to good players”… phrases usually uttered through a smugly knowing smirk and spoken disproportionately frequently by those sporting dark glasses, “.net” badging or inexplicably large hats.

Consider the following hypothetical game for illustration purposes – let’s, for the sake of my darling mum’s love of her son, call it “Denning’s Dice”. In this game the rules are decidedly simple – there are two players, each with a single six-sided die. We place our bet. We roll our dice simultaneously. The player who rolls the higher number wins that round. Are you with me so far? (If not, it’s probably best that you go back to your barstool now and settle up). However, if the dice are tied, we must compete for the round by answering trivia questions regarding the tasting notes of single malt scotch (hey, it’s my game, my rules). Let’s assume for the sake of the illustration that this trivia round is resolved based on our relative knowledge and skill and determined thereby.

83% of the time a round will be resolved by chance? Surely it’s predominantly a game of chance. Right? Not really.

The answer is quite simple: it depends.

It depends on how long we play.

There can be no reasoned argument that if we play a single round of Denning’s Dice that – no matter how encyclopedic my knowledge of scotch – that I will win. My skill cannot overwhelm my opponent and dictate a given round because a single round is manifestly predominantly (83%) determined by chance. 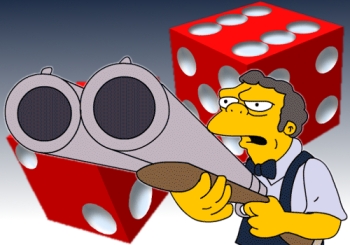 THE DUBIOUS MERITS OF
ARGUING WITH BARTENDERS
I (a poker neophyte on my best day) could sit down with the greatest poker player of all time and play a single hand and, by the luck of the cards, win. The expert could not overpower chance on a single hand by virtue of his or her superior skill. Indeed, my luck could conceivably run for several hands. However, during the course of a tournament I would surely be found at the bar arguing with the barkeep why cucumber is the only acceptable garnish with Hendricks while others battled it out at the final table. Similarly, if I were to play Denning’s Dice long enough with someone whose knowledge of scotch was inferior to my own, I would eventually take all of their money.

The simple fact is this: For any game in which any measure of skill is involved (even a small proportion), over a long enough timeline the vagaries of chance will be evenly distributed amongst the players. As such, chance’s effect is suppressed over the long term and the more adept player will prevail.

But – and here’s the important bit – this fact doesn’t make any given hand of poker “predominantly skill”. And this fact does not mean “poker” in some generic sense “is a game of skill”. What this does mean is that if poker is played over a long enough timeline skill will predominate – but to rely on such an argument that timeline has to be structured into the gameplay (read: tournament).

If the poker operators had made available only tournament play online, this argument would have a justifiable statistical basis in a jurisdiction where the “dominant factor” test was employed. If the operators in so doing had required a certain period of play, the element of skill would indeed, statistically, have been able to overwhelm chance and skill would have become the dominant factor.

But, regrettably, they did not.

One would do well to acknowledge that the poker-is-a-game-of-skill mantra only reached fevered pitch following the passage in 2006 of the UIGEA, in no small measure in my estimation as a post ad hoc justification of profitable activities well underway and which operators were loathe to abandon. So, the operators backed into this position versus consciously designing a business model intended to capitalize on the contours of the law.

And so, the phase “poker is a game of skill” is simply meaningless. It has the potential to be either true or false, but its truth value is entirely dependent on the timeline of play. It is perfectly conceivably true for certain tournament structures, and it is manifestly false for cash games where one can play for a single hand.

That’s it. That’s all I had to say. I feel better now.

The Glenmorangie has arrived now and here’s to the Men of Tain. Anyone up for a game of Denning’s Dice? We have time for a few rounds before the boarding call. We can stop whenever you like. Honestly.