Home / Press Releases / Take a sheet at the World Series of Poker! 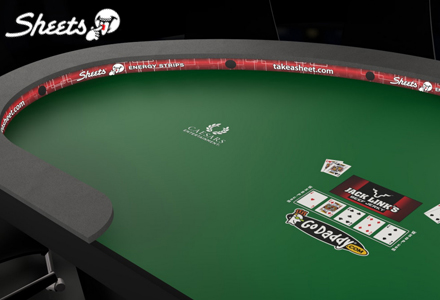 NEW YORK, NY (June 14 , 2011) – SheetsTM Energy Strips, “the new way to do energy,” co-founded by basketball star LeBron James, and top brand executives Warren Struhl, Jesse Itzler and Maverick Carter today announced they will serve as an Official Sponsor for the 2011 World Series of Poker at the Rio All-Suite Hotel & Casino. As a formal sponsor of the most prestigious card tournament in the world, SheetsTM Energy Strips will provide players the energy necessary to try and claim the most coveted prize in poker, a World Series of Poker Championship gold bracelet.

As part of the sponsorship agreement, the SheetsTM Energy Strips logo will be featured on the inner rung of the main television tables during all events at the tournament.  In addition, product will be available from all servers who will be wearing SheetsTM branded uniforms.

SheetsTM paper-thin, individually wrapped, dissolvable strips are placed on your tongue, begin to dissolve instantly and are easily swallowed and digested delivering hours of energy. With multiple flavors and a great taste, SheetsTM won’t spill or melt, have no calories, no carbohydrates, no sugar and require no water. SheetsTM uses proprietary technology that provides a breakthrough delivery system enabling consumers to get fast-acting energy – anytime, anywhere. No bottles. No cans. Simple.

“We’re thrilled to be an Official Sponsor of the 2011 World Series of Poker and provide energy to the top poker players in the world,” said SheetsTM Energy Strips CEO Warren Struhl. “Poker is a game that requires you to be sharp and attentive every single hand, and SheetsTM will help players do that. We look forward to working with the World Series of Poker.”

The SheetsTM Energy Strips brand was launched in May 2011 and is available nationwide. Supported by a marketing campaign featuring Co-founder LeBron James along with partners Amar’e Stoudemire, Pitbull, Drake, Ray Rice and others, SheetsTM is quickly becoming, “the new way to do energy.” As multi-platinum recording artist Drake said, “Why drink your energy when you can take a sheet!”

PureBrands, LLC, is a holding company that creates, acquires and markets proprietary and differentiated consumer products. It is the vision of a world-class team of physicians, scientists, athletes and entrepreneurs all on a quest to deliver products that promote energetic, balanced and healthy living.  The PureBrands team is dedicated to creating and selling revolutionary solutions to address a wide range of consumer lifestyle and wellness needs using proprietary wearable, topical, transdermal, and oral nutritional delivery systems.  The company’s inaugural product is Sheets™ Energy Strips due to launch in June 2011. Some of the world’s best athletes and hottest entertainers are founding partners and/or investors in PureBrands, including superstar athletes LeBron James, Serena Williams, and Amar’e Stoudemire, as well as award-winning entertainers Drake and Pitbull.

About the World Series of Poker

The World Series of Poker (WSOP) is the largest, richest and most prestigious gaming event in the world awarding millions of dollars in prize money and the prestigious gold bracelet, globally recognized as the sport’s top prize. Featuring a comprehensive slate of tournaments in every major poker variation, the WSOP is poker’s longest running tournament in the world, dating back to 1970. In 2010, the event attracted 72,966 entrants from 117 different countries to the Rio All-Suite Hotel and Casino in Las Vegas and awarded over $187 million in prize money.  The WSOP, in December 2008, was named the seventh most admired sports brand in North America by the Turnkey Sports Survey, trailing only the older and more established NFL, MLB, NBA, NHL, NASCAR and PGA Tour among sports properties. In addition, the WSOP has experienced groundbreaking alliances in broadcasting, digital media and corporate sponsorships, while successfully expanding the brand internationally with the advent in 2007 of the World Series of Poker EuropeSM. To learn more about the World Series of Poker, visit WSOP.com.