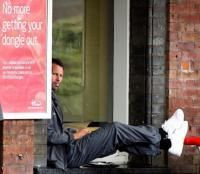 Since the back end of the last soccer season, the rumor mill has been in full swing. Whether it be who’ll be taking charge at Chelsea or which player Manchester City will be paying an overinflated amount for. The idle chit-chat could quite literally have anyone going anywhere. The real soccer gossip is in the front of the papers though. To say that the last couple of months have been rocky for Ryan Giggs might be the understatement of the millennia. Giggsy has seemingly gone from being the rugged Welshman who could do no wrong to a lying, cheating, womanizing, whore-bag of a man. All he really did was have what many powerful men the world round have though – a mistress.

Imogen Thomas was the straw that broke the camels back as far as revelations are concerned. The weekend saw fresh allegations that he’d slept with his brother’s wife and the only thing separating him from Woods is that he hasn’t yet been attacked with a golf club. The media have quite understandably been having a field day ever since they found out but this is a man’s life we’re talking about.

The privacy laws have been shown as fairly inadequate in this case. There are a number of things you are supposed to prove before publication. One of these is the public interest element i.e. does the public need to know who Giggsy’s been giving ten-of-the-best to? The answer to this is probably not. It makes for fun reading and gives everyone a joke down the pub. The Welshman hasn’t done a huge amount of wrongdoings though. Yes he slept with a “mistress” but it’s not the worst thing anyone’s ever done.

What we should all be considering is where will his next conquest materialize? He’s every Welsh housewife’s dream so if he’s stuck, he can always go back to the motherland. Thankfully Bodog has opened the book on where Ryan’s next bonk will be from. “Giggsy’s 3rd bird from?” gives bettors the chance to lay some money on where the next lady will be from. Currently England leads the way at 2/1, followed closely by Wales at 3/1. A member of his family is at 6/1, Ireland and Scotland at 9/1, and any other country at 5/1. We’re praying it’s another member of his family. Think of the uproar!