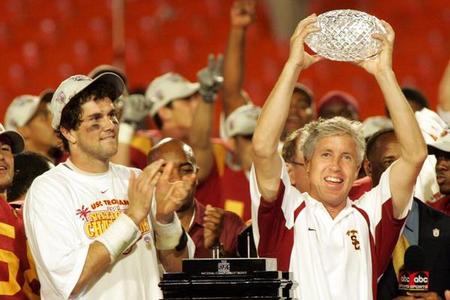 The University of California has taken another blow to their football program. The school has officially been stripped of its 2004 football national title by the Bowl Championship Series (BCS). Scandals in college football have almost becoming as commonplace as doping in cycling.

The BCS has now kicked USC when they were down, after N.C.A.A. violations rocked the program and already cost Reggie Bush his Heisman Trophy and kept the Trojans from being eligible for bowl games for the 2010 and 2011 seasons.

As the NY Time reports, the B.C.S. said such a move was already being contemplated when the university’s N.C.A.A. sanctions were announced last year, but was delayed while Trojans went through the appeal process. It didn’t take long for the BCS to make their move once the NCAA denied USC’s appeal.

As the NY Times reports, “The B.C.S. arrangement crowns a national champion, and the B.C.S. games are showcase events for postseason football,” the B.C.S. executive director Bill Hancock said in a statement. “One of the best ways of ensuring that they remain so is for us to foster full compliance with N.C.A.A. rules.

“This action reflects the scope of the B.C.S. arrangement and is consistent with the N.C.A.A.’s approach when it subsequently discovers infractions by institutions whose teams have played in N.C.A.A. championship events.”

It’s not like USC hasn’t been punished enough. The football team lost 30 scholarships over three years. And the sanctions that have been placed on the school are some of the harshest ever. Now the BCS has added insult to injury.

You would think that of all the organizations to have pity on USC, it would be the BCS. Considering the plethora of shady activity the BCS has become known for, you would think they wouldn’t throw stones while they were living in a glass house.