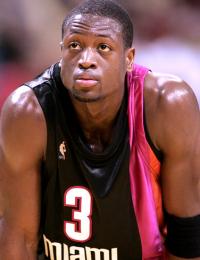 If somehow you forgot who the captain and the leader of the Miami Heat was, D. Wade’s performance in Game 3 of the NBA Finals reminded everyone, that this is still his team. Wade’s leadership and spectacular performance helped the Miami Heat defeat the Mavericks 88-86 to take a 2-1 series lead.

From outset of game 3, it was clear that Wade was in one of those zones. Wade has won a championship before, he’s beaten Dallas before, and he was determined to make sure the Game 2 meltdown was a distant memory. Wade was everywhere on the court, grabbing rebounds and making highlight reel plays. Yet again, the Mavericks found themselves playing from behind early in the game going down by as many as 12 points. The Mavs showed some poise by erasing the Heat lead and tying the game but playing from took their crowd out of the game.

The normally rowdy American Airlines Arena was subdued, you didn’t see Jason Terry flying around like the Jet or Tyson Chandler hyping the crowd. The Heat and Wade took the life out of the Mavs fans.

After Dirk Nowitzki put the Mavs on his back and led a furious late game charge to tie the game. With less than one minute left to play and the game tied, the Heat put the ball in Wade’s hands. Dallas immediately doubled Wade and he passed it to LeBron who made an exceptional swing pass to Bosh on the baseline. Bosh stepped up with the poise of a seasoned vet and knocked down the jumper to give the Heat the lead.

Dirk had one chance to tie the game, but Udonis Haslem’s excellent defense forced him into a tough shot that just went long to give the Heat the victory.

Lebron James didn’t have his best game, he finished with 17 points and 9 assists but his defense on Jason Terry has completely taken him out of the series.

Mavs fans can complain about their bench production and the lack of scoring, but the bottom line is that the Miami Heat are the best defensive team in the NBA and they have three superstars and the Mavericks only have one. It’s that simple. If Dirk Nowitzki had a game like Bosh or James, his team loses. And if he’s spectacular, as he was last night, his team still loses, because it’s just him.

Since the NBA moved to the 2-3-2 Finals format, game three has always been the pivotal game. Eleven times the team that has won game 3 has gone on to win the NBA Championship. Heat fans are hoping that trend continues.