Home / Poker / Freakonomics author declares poker a game of skill… So what? 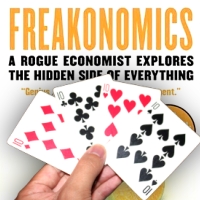 Steve Ruddock recently guest wrote a post on Bill Rini’s blog taking the Poker Players Alliance to task for (among other things) continuing to base so much of their lobbying activity on convincing US legislators that poker is a game of skill. The traditional argument goes that, as a game of skill, poker stands apart from slot machines, roulette, craps and other predominantly luck-based games, and thus deserves special treatment under the law. Ruddock thinks the PPA is wasting its time because, however correct this argument may be, it invariably falls on deaf congressional ears.

Ruddock’s blog comes hot on the heels of the release of a new research paper by Thomas Miles and Freakonomics author Steven Levitt entitled The Role Of Skill Versus Luck In Poker: Evidence From The World Series Of Poker. The two economists compared data on the 32,000 players who took part in the 57 events at last year’s WSOP, paying particular attention to 720 players they ranked as “highly skilled” based on previous performance. After crunching the numbers, they found that those highly skilled players generated an average return on investment (ROI) of 30.5% at the 2010 WSOP, compared to an average ROI of -15.6% for the other players. The authors concluded that these skilled players would be virtually guaranteed better returns playing poker than choosing to invest the same funds in financial markets.

So, slam dunk, right? Poker is a game of skill. Trouble is, Ruddock is right. Facts don’t matter much in what remains an often purely emotional debate. Facts can’t convince those that are morally opposed to gambling (of any kind) that the thing they have spent their adult lives describing as a mortal threat to the sanctity of the American family is suddenly harmless. You probably have better odds of seeing former president George W. Bush go on The Rachel Maddow Show and say “Yeah, it was a mistake to invade Iraq. It really had fuck-all to do with 9/11. My bad.”