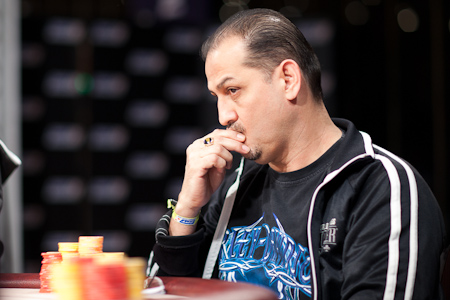 With TV coverage on a two-hour delay, most of the field at the European Poker Tour (EPT) Grand Final in Madrid were in the bar by the time those around Eruope were able to see any of the action. Though this was as much down to the play of the winner as it was the profligate performances of the other seven remaining players.

Venezuelan Freitez led from the outset after bringing the chip lead to the table from the previous day. Four of those in with the chance of winning the €1.5m prize had gone before EPT started the cameras rolling. Of those eliminated early on, the chances of poker’s triple count went home with Alex Gomes. Unlike a number of recent major sporting occasions, Spain’s challenge faltered in the early part of the day. PokerStars’ own Juan Maceiras’ surrendered his place at the table taking home €315,000.

The day belonged to the Latin American player though. €1.5m and a Shamballa bracelet is better than a slap in the face. Add to this a place in the Champion of Champions event getting underway at 2pm today at this very same venue and Freitez could have quite the end to his EPT Season 7.

The top eight in the prize pool were as follows: