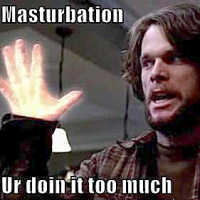 Current Australian laws prohibit online poker or casino betting, but no online gambling company has yet been prosecuted under these statutes. Now, Australian anti-gambling Senator (sen-nutter, more like it) Nick Xenophon has proposed legislation that would allow online gamblers to void losing bets made via their credit cards. That’s right – losing bets only, making every credit wager a no-lose situation for punters. Enter Xenophon, stage left, cackling with glee: “I have to say there’s something appealing to me about online casinos losing their shirts rather than the punters.” At which point, Xenophon pulled his penis out of his trousers and began vigorously masturbating. Or so we imagine, given that this law has zero chance of passing, and thus its proposal is solely intended to assist Xenophon’s self-gratification.

Speaking of sex and gambling, authorities in Thailand have shut down an underground ‘sex lottery’ in Ayutthaya. The huai siao (‘pleasure lottery’) was run out of a factory, where workers purchased tickets bearing a two-digit number. If that number matched the last two digits of the winning ticket in Thailand’s government-run lottery, some lucky factory worker won a night with a young woman at a local hotel. At the hotel, the winner was handed a booklet containing photos of ‘at least 10 beautiful women aged 18-25’, some of whom were themselves factory workers. Seriously, worst… union… ever.

The Fairway Charity Golf Open is set to tee off May 24 at the prestigious K Club Golf Resort just outside Dublin. Proceeds from the event will go to the Children First Foundation, an outreach charity for kids and families across Ireland. FremantleMedia Enterprises has signed on as sponsor of the ‘closest to the pin’ competition on the 8th and 12th holes, while CalvinAyre.com will be on hand as Official Video Media sponsor. In other words, we’ll be out there preserving your divots for the rest of the industry to ridicule for years to come. Just be lucky that the event takes place the day before Calvin’s Seven Deadly Sins 50th birthday at the iGaming Super Show. Anyone who attends that sordid soirée will be lucky to be able to swing their legs out of bed the next morning, let alone swing a golf club.