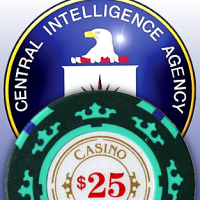 If you ever needed proof that US government agencies don’t talk to each other much, here it is. As the Department of Justice cracks down on online poker, the Central Intelligence Agency is looking to open its own online betting site, a prediction market that would track cyber security. The concept is not exactly new. Back in 2001, the Defense Advanced Projects Research Agency (DARPA) launched a real-money prediction market, in part, to help it assess where the next big terrorist attack might take place. When the existence of the DARPA site became public knowledge in 2003, suitably outraged politicians denounced the market as “some kind of fantasy league terror game,” prompting DARPA to dismantle the operation, despite prediction markets having a good track record at doing just that – predicting outcomes.

As one of the researchers involved in setting up the CIA’s potential new cyber market told Forbes magazine, “a marketplace can aggregate and disseminate information in a way that’s efficient and transparent.” The CIA’s own research shows that betting markets are better than polls at predicting electoral outcomes, and that orange juice futures markets are better at predicting Florida’s weather than an Accu-Weatherman in Tallahassee. Then again, there are potential pitfalls to such a cyber market, such as someone placing a heavy bet on a particular company’s data being hacked, then unleashing their own hack attack. The market’s designers are thus keen to stress that it would be designed in a way to prevent it from being manipulated by any lone nerd, er, individual.

Anyway, the CIA hopes to have an ‘alpha’ version taking bets over the next few months, although it’s as yet unclear how the site will get around the nation’s various anti-gambling statutes. Greg Shannon, a researcher at Carnegie Mellon’s Software Engineering Institute (which is helping build the market), believes that “in the long term, we want to have money involved. But getting through the legal issues isn’t trivial.” Workaround solutions may involve using some form of non-traditional currency — just as Google supplies its employees with ‘investment funds’ to wager on its own in-house prediction market — or requiring that winnings be donated to charity. It’s undetermined at this point just who will be eligible to participate in the CIA’s proposed tech market, but we’d like to remind the CIA that there are an awful lot of poker players with a lot of free time and money on their hands these days.