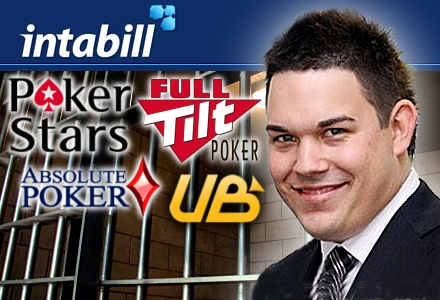 The indictment unsealed on Black Friday bore case number 10-CR-336, which identifies it as having been filed last year. TalkLeft does a nice job tracing it back to the April 2010 arrest of payment processing wonderboy Daniel Tzvetkoff, whose company Intabill spectacularly imploded in 2009, allegedly cheating poker companies like Full Tilt, PokerStars and Absolute Poker/Ultimate Bet — all companies named in Friday’s indictments — out of millions. TalkLeft go on to trace Tzvetkoff’s arrest to the arrest of Intabill’s former US representative Andrew Thornhill in December 2009. (A few more twists will undoubtedly lead us to the arrest of Kevin Bacon.) 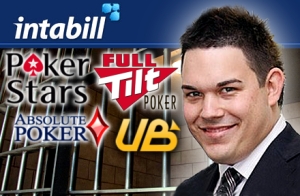 Although not listed as a defendant on the Black Friday indictment, Thornhill’s name appears alongside that of defendant Chad Elie. Elie, who was arrested Friday in Las Vegas, is yet another former Intabill associate. In 2009, Elie, Thornhill and someone identified only as ‘Elie’s Partner’ began a ‘transparent processing’ relationship with Utah’s SunFirst Bank on behalf of the indicted poker companies. (SunFirst vice-chairman/defendant John Campos was also arrested on Friday.) The identity of ‘Elie’s Partner’ isn’t known, but a clue might be found in a recently unsealed federal lawsuit Elie filed against SunFirst and a prominent Utah businessman named Jeremy Johnson.

Elie’s suit against Johnson (plus nine other individuals, 10 corporations and 51 shell companies) alleged that Johnson used his “trusted relationship” with SunFirst to convince the bank to do business with Elie’s payment processing services. In return, Elie and Johnson were to share the profits 50/50, but instead, Elie claims Johnson blew the money on things like an airplane, real estate and gold. (You know, the necessities.) Oh yeah, Johnson also personally lost $1.536m on Full Tilt between April and October 2010.

Just to make things interesting, Johnson was already facing a federal lawsuit for allegedly bilking consumers out of $275m via fraudulent over-billing for subscription services. Yet Johnson has not been charged in connection with the poker indictments, despite admitting in court documents that his companies had merchant account arrangements with Full Tilt and other poker outfits, and that he’d used some of the poker companies’ funds (with their permission) for investments in oil drilling ventures. Because, you know, his obvious skill at the poker table had convinced these companies that he knew a good bet when he saw one.

Anyway, back to Elie. Convinced he’d been cheated, Elie filed his $20m lawsuit against Johnson in federal court in Dec. 2010. So let’s see if we have this straight… Elie, who well knew he was up to something the DoJ frowned upon, decided to file a lawsuit that essentially invited the feds to take a closer look at his financial dealings. In March, Elie dropped the suit without explanation, presumably because “D’oh!” is not a proper legal term.

Which brings us back to Tzvetkoff. Following Intabill’s 2009 collapse, Full Tilt’s parent outfit Kolyma Corporation filed civil charges against Tzvetkoff, but all that lawsuit really accomplished was to attract a lot of media attention to the sums being generated by the online poker industry. Tzvetkoff’s recent Courier Mail profile suggested his April 2010 arrest in Las Vegas came as the result of a tipoff from Full Tilt, whose execs were presumably frustrated when their court case failed to deliver the desired results. In turn, Tzvetkoff’s August 2010 release from prison was seen as a payoff for his willingness to dish the dirt on former clients, like Full Tilt. And round we go…

Honestly, if there’s a moral to this story, it’s that if you truly believe law enforcement is dying to stretch your neck, it’s probably best not to volunteer to put your head in the noose by filing a purely symbolic lawsuit that has little or no chance of succeeding. You also might want to take a pass on worshipping at the feet of the next ‘wonderboy’ that comes along.