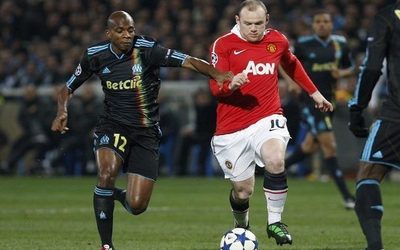 Manchester United face a tough task in tonight’s Champions League action as they attempt to become the second English club to secure a quarter final berth.

Standing in the way is a Marseille side that have shown themselves to be “no mugs” in this season’s competition under the tutelage of boss Didier Deschamps. If they score a goal at Old Trafford you could easily see the French champions pulling off a bit of an upset. It’s a fairly large if though.

The first leg two weeks ago showed that they have the ability to stifle the home side’s attacks with a hard to break down defence. Old Trafford is a very different proposition to the Stade Velodrome though.

If United aren’t able to call on the services of Portuguese winger Nani it will be a huge plus for the French side and with Rio Ferdinand still missing from the home sides back four they could knick the elusive goal they require.

Marseille, however, will be without striker Brandao who has fled back to Brazil after a sexual assault allegation and it will take away some of the physicality that could trouble the young defender Chris Smalling.

The other striker, Andre-Pierre Gignac, is something of a joke for English fans thanks to his profligate performances for the national team. If a goal’s going to come it could well be from the French international though.

The night’s other game sees Inter Milan travel to the Allianz Arena in Munich as they attempt to overturn a 1-0 deficit from the first leg.

Inter couldn’t catch Bayern at a worse time as they celebrate the 6-0 demolition of Hamburg the past weekend, their largest win for some time.

The Italians are the reigning champions but need at least two goals to have any chance of reaching the last eight and it’s not often that teams get one, let alone two, in the Champions League in Munich.