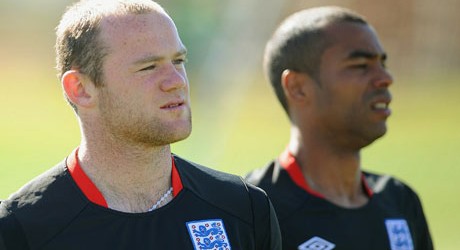 With both their teams seemingly approving of their actions, Wayne Rooney and Ashley Cole are available for tonight’s game after separate incidents over the weekend.

In winning, Manchester United could extend their lead over the London side to 18 points, a fact that looked incomprehensible earlier this season when Chelsea were running away with the league. The attention will be on the two English players though.

Rooney’s decision over the weekend that Wigan’s James McCarthy deserved a clout round the head was derided by most of football – except for United, and, more importantly, Saturday’s referee. Yesterday the FA decided physical violence had its place in the game as they reportedly look to further diversify their offering so that pugilists feel welcomed on the field of play and in the process chose not to punish Rooney.

The FA is also looking at a tie up with the National Rifle Association after they successfully managed to deflect any blame for their part in Cole’s air rifle misdemeanour. “They weren’t involved though,” I hear you cry. Well it was part of the “teach players self defence” plan and it went rather pear shaped when they got young Cashley involved.

The fixture itself should give us a few answers to the burning questions of a the day. Are Man Utd really that much better than Chelsea? Will Cole bring an air rifle to the ground as a practical joke? And, could Carlo Ancelotti chop off his eye brows as a show of defiance against the unpopular “The Rock” affliction?

The bookies are all getting rather excited at the prospect of last season’s top two facing off, some even protesting to “taking on” the Mancunians after Saturday’s thumping of Wigan

Victor Chandler spokesperson Charlie McCann said, “United may have scored 4 at the JJB but they were obviously flattered by the score line and we are very keen to take them on. Torres has the Indian sign over Vidic and it is surely only a matter of time before the new look Blues fire on all cylinders. We think it will be tonight.”

On the other hand, StanJames correspondent Garry McGibbon said: “Our traders have been scratching their heads over this match and they simply can’t split Chelsea and Manchester United. Chelsea have been indifferent of late while United have been iffy on the road all season until their 4-0 win against Wigan at the weekend, a result we thought grossly flattered United.”

All the talk surrounding the game probably means that the sides will play out a boring stalemate with not so much as a stray air gun pellet and Glasgow kiss for the paper’s to feast upon the following day.