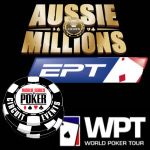 Poker history was made Thursday as the Aussie Millions folks managed to attract 20 entries into what’s being dubbed the priciest buy-in tournament in history. The AUD $250k buy-in Super Duper High Roller one-day event brought out familiar poker faces such as Phil Ivey, Tom Dwan, Chris Ferguson and other people far far richer than ourselves, like Asian businessmen Richard Yong, Wang Qiang and Paul Phua. Only the top three would finish in the money, while the rest got a lovely story to tell their friends about how they blew $250k one afternoon.

In other tournament news, the year’s first major poker event on European soil is off to a roaring start. The European Poker Tour’s Deauville stop saw 891 players buy-in over two starting days, easily surpassing last year’s total of 768. A prize pool of €4.276m is up for grabs, with €880k reserved for the first place finisher. Viktor Blom will be among the 500 players heading into Day 2, a promising start for Isildur1’s first European appearance as an official member of the PokerStars team.

Stateside, the final table is set at the World Poker Tour Southern Poker Championship. Six players will do battle Thursday for the $601k first prize at the Beau Rivage casino in Biloxi, Mississippi. The final table may see history being made, as no player has ever won the same WPT title twice. Hoyt Corkins, 2010’s champ, did not survive Day 4’s action, but 2009’s champ, Allen Carter is #2 on the chip count, just a hair back from overall leader Alexander Kuzmin.

Finally, 25-year-old Huy Nguyen took the World Series of Poker Circuit main event at the Choctaw Resort Casino in Durant, Oklahoma. Nguyen vanquished a field of 808 to take the WSOP-C ring and $232k, his biggest career cash. Also qualifying for the WSOP-C National Championship is second-place finisher Traci Brown, the first woman to be guaranteed a seat at the $1m Championship. Next stop on the Circuit is Tunica, Mississippi from Jan. 27 – Feb. 15.