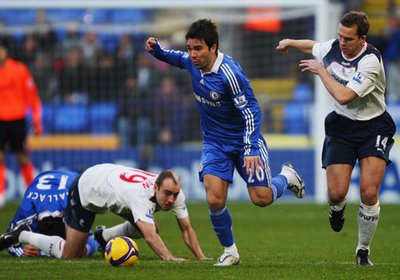 If you believe everything that you read or see on the TV then you’d be wondering just how Carlo Ancelotti is still in a job. This is Ancelotti the manager of Chelsea, currently sitting fourth in the Premier League with games in hand over all the teams around them and going into tonight’s game at Bolton with a real chance to return to third position.

The game is likely to play second fiddle to the escalating Keys/Gray Gate scandal that is currently filling the gossip columns. The two protagonists have already announced they won’t be present for tonight’s broadcast of Monday Night Football, with the infinitely more annoying Jamie Redknapp filling in.

What can we expect from the match itself though?

Bolton have surprised many with their performances this season and might even fancy themselves to turn over Chelsea, a club who have clinched two past Premier League titles in their manor. Chelsea will be without Frank Lampard for the game, the manager has admitted they haven’t played well since October, and William Hill have them odds on to win nothing this season. They’ll definitely lose then, right?!

Although the more pressing issues for the club is to whether they’ll be able to hang onto many of their most influential players ahead of next season, namely Didier Drogba.

Hills spokesperson Graham Sharpe, said: “If Chelsea do finish outside of the top two one would expect a significant personnel change for next season.”

Obviously tonight’s game is the first hurdle, but it certainly doesn’t look good going forward for Carlo’s side.