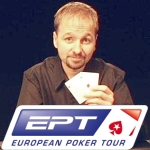 Daniel Negreanu entered Day 3 atop the leaderboard at the EPT Vienna, but ended up just behind Konstantinos “arxigos” Nanos at the conclusion of play. Day 3 began with 80 players and closed with just 24 left in the hunt for the €700k first prize. Saturday’s action gets underway at lunchtime, and will continue until the field is whittled down to the final table.

Greek doctor Nanos, who qualified for the tournament via a $20 online satellite, ended the day with 2.007m chips, with Negreanu hot on his heels with 1.954m. Up to this point, Kid Poker had been having his worst year since 2001 in terms of winnings, but a strong finish here would do a lot to turn that ship around. Meanwhile, Nanos is looking at his biggest payday ever, his previous claim to fame being a nearly $10k cash at the EPT Tallinn earlier this year.