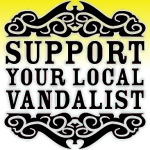 A proposed 4,750-slot casino at an industrial mall in Anne Arundel County, Maryland will be put to a vote this Tuesday. Polls are showing a dead heat between those in favor and those opposed. The debate leading up to the referendum has been heated, with almost $8m spent by both sides on advocacy and/or mudslinging.

Anyway, without further ado, let’s meet our fighters. In the ‘nay’ corner, we have the Maryland Jockey Club and the aptly named No Slots At The Mall. The ‘aye’ side’s champion is Jobs and Revenue for Anne Arundel County (J&R). Are you ready? Then LET’S GET IT ON!

J&R’s campaign manager Todd Lamb claims that 700 of his advocacy signs have been vandalized during the campaign, at a cost of some $60k to his organization. We have no way of verifying Lamb’s estimates, but it is true that at least 70 of those signs were recently discovered in the back of an anti-gambling man’s pickup truck.

The anti-gambler is 50-year old David Scott Corrigan, a man described by his lawyer as “a guy that’s pretty religious, not in favor of gambling.” The legal eagle went on to state that Corrigan “didn’t think what he was doing was a crime.” Whatever Corrigan now claims to believe, his actions on the night in question suggest he understood all too well that he was in the wrong.

After too many of their signs were vandalized, J&R installed video cameras outside their headquarters. These cameras soon caught Corrigan using a box cutter to remove signs posted out front. It was 4am, and Corrigan was wearing a yellow construction hat and reflective vest, a fashion statement police say was an attempt to pass himself off as a state highway worker. Despite Corrigan’s disguise, police nabbed him shortly after he started ‘work’, as depicted in the video below.

J&R’s Lamb thinks Corrigan’s outfit and calm demeanor prove that the incident was “not a random act,” which leads him to the conclusion that Corrigan must have been ‘coached.’ The No Slots folks have denied any connection with Corrigan, and have labeled efforts to tar them with Corrigan’s sins as a “desperate tactic” by J&R. Ah… ain’t democracy grand?