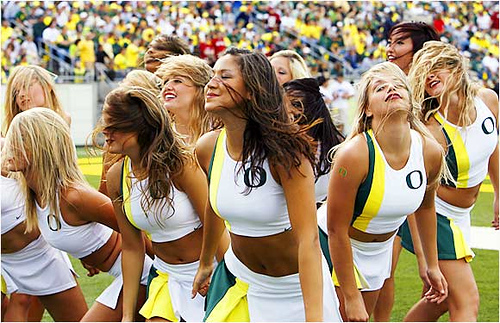 The Ducks have created such a buzz throughout college football with their high octane offense and the surgical beat-downs they have been laying down on other teams that they finally caught the attention of the quacks at the BCS. Even the Oregon Ducks are ranked number No. 1 in the nation for the first time in the history of the school by the AP polls, but the BCS doesn’t give a shit about that. The Oregon Ducks get stuck with the No.2 ranking which is still the highest ranking in school history by BCS standards, meanwhile the Oklahoma Sooners snatched up the No.1 spot, a spot they’re well accustomed to having.

So right now it would be Oklahoma and Oregon in the National Championship Game if it started today, but what about Boise State? The Oregon Ducks to light the college football world on fire just to get the attention of the BCS, Boise State would argue they’ve been doing that for years. So why does Boise State always get treated like the red headed orphan? What does Boise have to do to get into the National Championship Game? Going undefeated will help, but considering their toughest games left on their schedule are with Nevada and Hawaii, I don’t see it happening.

Will Oregon and Oklahoma be in National Championship Game? History says no. It has happened only one time in 12 seasons of the BCS that the teams that were at the top of the first standings played in the championship game. That was 2005 with Southern California and Texas. Right now Bodog has the Sooners at 3/1 to win the BCS National Championship and the Oregon Ducks at 5/2 and Boise State at 5/1. So if we follow history and say the chances are the Ducks won’t meet the Sooners, then who will sneak in there? Alabama 15/2? Michigan State 16/1? TCU 15/2?

Offerings on which teams will make the BCS National Championship game are exciting for bettors because they don’t just incorporate wins and losses, but the bettor must try and anticipate how the BCS standings will play out, something that damn near nobody truly understands and few people can come to an agreement on, which is great for betting.