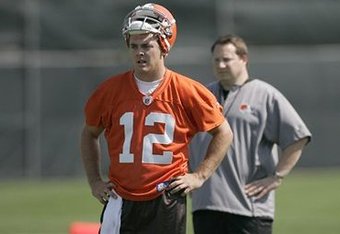 It’s like that scene from the movie 300, where the young boys are thrown into the wild and left to survive on their own, those that return alive are considered worthy…Eric Mangini starting rookie QB Colt McCoy against the Pittsburgh Steelers to me, is pretty much the same thing. Talk about trial by fire.

The Steelers are one of the best defensive teams in the NFL, they play one brand of football, and it’s called “smash mouf”.
It goes without saying, the Browns offensive line isn’t the best, which mean McCoy can expect to get hit, and not just hard, but Steeler hard. For a rookie it’s the kind of game that will probably make him question whether he truly wants to be a QB in the NFL.

Under normal circumstances this would be a sketchy move. But given the fact the Steelers are coming off a bye week and they’ll be getting Ben Roethlisberger back at the helm, they won’t only be jacked up they’ll be prepared. You can bet the Steelers are salavating at the prospect of a bright eyed rookie QB standing in the pocket, holding the ball too long…it could get ugly. I just hope McCoy makes it out injury free, he’s already had a wonky arm injury, if he thought that his arm felt numb then, it will pale in comparison to how numb his body will be after Sunday. The Steelers could very well rip this kid apart, and then walk off with his cute little girlfriend who probably wants out of Cleveland any damn way.

Mangini has made it clear that he’s leaning towards McCoy barring miraculous recoveries by Seneca Wallace and Jake the interception machine Delhomme. McCoy might want to take a knee and light a candle of hope.

You know sportsbooks are going to be asking the real questions in props, like Does McCoy throw a single TD in his debut? How many interceptions will he throw? How many times will McCoy get sacked?

You ‘d love to see a stunning performance out of nowhere, but realistically, get the cart ready.