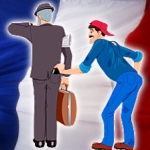 Nicolas Beraud, CEO of French firm Mangas Gaming, has taken his country’s legislators to task over their regulated market’s maximum 85% return limit to players. Beraud told a crowd at Monaco’s iGaming Exchanges “The odds are not competitive compared to other markets. It is an incentive for players to try to play on foreign websites.”

Echoing Beraud’s dissatisfaction, Emmanuel de Rohan Chabot, CEO of tote operator ZEturf, said that the shoddy rate of return meant that the average horse bettor was losing €110/month, compared to the €60/month pre-regulation. This, along with the other impractical elements of the regulated market, meant that keeping punters from fleeing to international operators was “a hard job.”

It wouldn’t be so hard if the government would just erect a digital Berlin Wall (instead of the current digital Maginot Line) to keep French punters from being able to access the international operators, says Aymeric Verlet of horse racing outfit PMU. Verlet thinks that’s the only way the licensees “can live with the level of taxation.”

Chilipoker’s Alex Dreyfus is also not a big fan of taxation that is “more or less 40% of the revenue, which is very painful.” (Le ouch!) But lest anyone assume that this litany of complaints means French licensees are unhappy with their lot, perish the thought. “The industry is happy about regulation,” says Dreyfus. So happy they can’t stop crying, apparently.