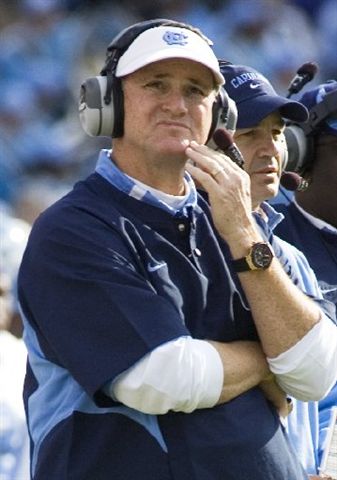 It happens in college basketball and college football all the time. Scandal. Player’s take money, player’s take gifts and who knows what else from agents, boosters and the like and its been in the games forever…But never at Chapel Hill.

The University of North Carolina has been one of the most reputable and stand up schools in America, the operative word here is, Been, as in has been and no longer is. The scandal that has rocked the school involves three players who have taken over $20K in gifts and other perks and an assistant coach who knew all about it.

Defensive tackle Marvin Austin, wide receiver Greg Little, and first team All-ACC defensive end Robert Quinn are all done, finished, suspended, booted and tossed from the UNC football program. Assistant coach John Blake has been canned, but surprisingly, head coach Butch Davis is still at the helm. Davis maintains he knew nothing about it…Seriously? He should be fired for that alone, but the Athletic director is standing behind Davis, at least until the end of the season.

Here’s the thing, the NCAA has rules against this type of thing, but they clearly aren’t working. It’s tough to tell a bunch of kids that are making the school and the program millions of dollars and not getting paid for it that they shouldn’t get a little taste considering it’s their bodies and their blood, sweat and lives on the line. It seems almost every superstar college athlete and NFL prospect is on the take, look at Reggie Bush…who I still think should never have relinquished his Heisman which he rightfully earned on the field…But the point is the rules the NCAA have in place are either inadequate or the punishment levied on these players is meaningless…Yeah if they get caught, they’re suspended or expelled from the school, big deal, they’re only getting gifts because they’re surefire NFL talents in the first place. It’s no sweat off their backs, they’re going to the League the next year!