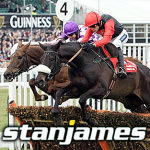 The Jockey Club’s Racing For Change initiative is racing to the bank with a check in hand now that Stan James has inked a six-figure, five-year pact to rebrand Cheltehnam’s showpiece Champion Hurdle with the online gaming company’s moniker. The Champion Hurdle was previously sponsored by corrugated packing firm Smurfit Kappa.

The deal with The Jockey Club will also see Stan James sponsoring the Fighting Fifth at Newcastle, the International meeting at Cheltenham, and the Champion Trial at Haydock Park. Cheltenham’s Edward Gillespie was suitably chuffed that having a single sponsor backing ‘four of the most important two-mile hurdle races will enable a continuity to the promotion of that category.’ And keeping all the same signage in place will require less glue, which will require less losing horses being sent to the knackers. Win-win!