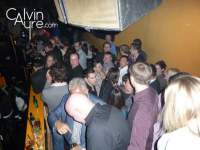 Any party that starts with Jager Bombs that you’re supposed to shoot as soon as you enter the door is probably going to be a good one! People attending the BAC day 2, Affiliate Edge sponsored party at Dokk Disco probably needed that pick-me-up after a long day on the conference floor.

You took a journey through time after you checked your coat (and the Jager bomb started to settle)… What could be more fun than people roller skating (and I’m not talking inline) to Deniece Williams’ Let’s Hear It For The Boy and Rick James’ Superfreak. Not sure I want to know what the insurance was on a party like this one as I did witness a poor iGaming gent fall directly on the back of his head on the cement floor. After a couple shakes of the head and a few eye squints, he assured me he was OK and took right off again skating. As of course the party continued.

Affiliate Edge did a great job of ensuring everyone was right pissed from the open bar ending at 23:30, at which time the club opened up to the public. Some chose to stay at the club, others chose to crash the Marriott hotel lobby bar – which is where I ended up at… Somehow 5am rolled around and the poor Marriott staff didn’t realize – just because you shut the music off and turn the lights up bright doesn’t mean the Industry will stop partying, even if it is 5am… Just means we’ll get a little louder and invade the (slightly darker) interior lobby, taking over the baby grand piano.

Checkout the Picture Gallery & the DAF award at the BAC Edge Affiliate Party at Dokk Disco.