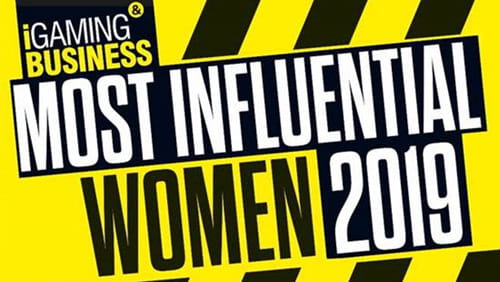 London, 19th November 2019 – iGaming Business has today revealed the results of its Most Influential Women 2019 list, with publication in issue 119 of iGaming Business and on igamingbusiness.com.

The publishing division of ICE London organiser Clarion Gaming introduced the list in 2018 to try to redress the gender imbalance that exists at the highest levels of the gaming industry.

It aims to showcase the industry’s most accomplished women and inspire others to progress their careers within the industry.

“iGaming, like many other industries, has significantly fewer women than men at the top levels of business and a persisting gender pay gap. However, there are a growing number of women occupying extremely important roles within our industry,” said Stephen Carter, editorial director of iGaming Business.

“This year’s list features women who have played key roles in transformations within their organisations, women who’ve been champions of diversity and women who’ve raised the profile of the entire sector itself.”

Ewa Bakun, director of industry insight and engagement at Clarion Gaming and a member of the judging panel, added:

“We have seen the topic of diversity and inclusion evolve over the last few years from a truly niche one to the mainstream and every major organisation in the gambling sector, which is still male-dominated if we look at the board levels, understands now that it’s as much a commercial imperative as it is a moral one.

“True role models for other aspiring female managers and executives, like those on iGB’s Most Influential Women list, are key and we’re hoping that their success will help many other talents from underrepresented groups develop their careers and genuinely feel that the gambling industry can be a welcoming environment offering professional growth.”

Due to an increase in both the quantity and quality of nominees this year, the judges also listed five runners-up. These were Maris Bonello, head of responsible gaming and research at Kindred;

About the list
The list was compiled from nominations received by a survey conducted on SurveyMonkey between July 22 and September 10. The survey was promoted to those working within gaming or related sectors.

The entries received were then assessed by a panel of judges chosen from across the industry. The judges were Ewa Bakun, director of industry insight and engagement at Clarion Gaming; Andrew Bulloss, partner at Odgers Berndtson; Kelly Kehn and Christina Thakor-Rankin, co-founders of All-in Diversity Project; Suzi Read, head of talent development at Kindred; Holly Straker, inclusion, engagement and events executive at Sky Betting and Gaming; and Helen Walton, founder and CCO of Gamevy and Gluck.