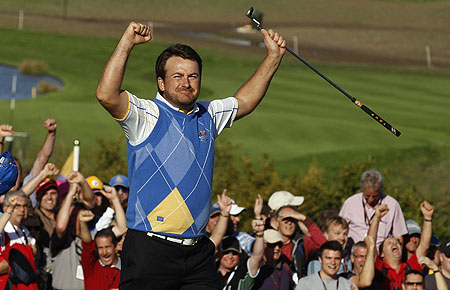 Listening to the various news broadcasters last night and this morning, it would be easy to think that they were in some way obsessed with whether or not the Ryder Cup at Celtic Manor had been a success – we won, in dramatic fashion, on the last shot of the tournament…Of course it was a bloody success!

This all came as all manner of outlets fell over themselves at the regaining of the little gold cup, as the members of Monty’s side fell over each other quite literally as they continued to rush for the bar into the early hours of this morning, and if young Irishman Rory McIlroy’s tweets are anything to go by they’re still drunk now – Miguel Angel Jimenez leading the charge for the bar, cigar in mouth, hair let down.

In terms of a golf tournament though it had pretty much everything you’d have hope for were you arriving in the Welsh resort of Celtic Manor – unless you came on Friday, when you stood in the rain for an entire day, saw about three hours play, and got no refund if you decided to go home. Tough love from Sir Terry Matthews, the Manor’s owner.

Although in terms of the spectators there was plenty a mishap to be seen amongst the massed ranks of thousands of Europeans and a polite smattering of Americans. Watching yesterday’s proceedings it was hard not to look out for various spectators generally stacking it as they attempted to watch from the best vantage point, only to be caught out by the various gradients to be found around the course. Obviously Matthews had thought how much comedic value could be had from mud-ridden hills in Wales.

One disappointment though was that Paddy Power didn’t attempt any other plans after their abortive attempt at a Hollywood style sign, which was shot down by the authorities before the tournament had even started, and it was rather disheartening that they didn’t send up an inflatable hot air balloon in the shape of a leprechaun, or at least send in a couple of teams of goal ball players to kick around a cat for a few hours. Although, it could be a lot more amusing if they try it over the pond in two years time – imagine that!

Elsewhere on the final day we saw the return of the master of…golf, Tiger Woods. This year’s version was in the upper echelons of his Ryder Cup appearances, and is it any wonder after he got the deadweight that was Elin Nordgren off his back. The last straw came when she tried to obliterate his face with a driver, which helped Tiger to become as one with the golf club. The victim of Woods on the final day was European Wild Card choice Francesco Molinari. The Italian did play rather well, and was two up entering the third hole, but then the big cat awoke.

Tiger’s finishing score was eight under par, and that was only through the 15th hole. Got knows what he could have done with those extra holes.

The matches finished up as dramatically as ever, with the Graeme McDowell taking it to the final hole with Hunter Mahan who, whilst still sounding like someone who should be on the Fishing Network, failed to deliver when under the pressure of the entire golfing world. Bloody bottle-job I tells ya!

But that was how it finished, and as Monty retired to any one of a number of mistresses and a bottle of Famous Grouse he was left to smile uncontrollable at what can be considered a truly great victory for Team Europe.