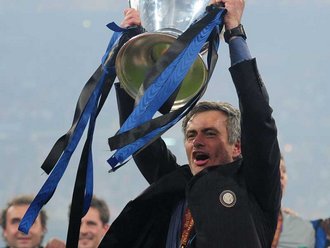 Love him or loathe him José Mourinho is the dog’s bollocks. He may have put more noses out of joint than Michael Jackson’s plastic surgeon but this is a man whose tactical prowess knows no bounds. As he proclaimed when joining Chelsea in 2004, he is the Special One, and after clinching his second Champions League last night, he has once again proved that doesn’t just put his money where his mouth is. He is the money.

As someone who has reported on Italian football for the best part of the last decade I wouldn’t have touched Inter Milan to win Europe’s ultimate club prize with a barge pole – until Mourinho came along. But this man is a genius. As soon as he arrived at San Siro two years ago he recognised his side’s over-dependence on Zlatan Ibrahimovic – a striker of great talent but one who prevented the Nerazzurri from playing well as a unit.

Not only was Ibrahimovic shipped out for a massive fee of €66m, but he got Samuel Eto’o in return from Barcelona and made further world class additions to the squad by drafting in Brazil captain Lucio to firm up the defence, playmaker Wesley Sneijder to pull the strings in midfield and Diego Milito to shoot the bullets made for him by the Dutchman. Bodog’s 28/1 was simply too good a price to pass up.

Although the league title win was closer fought than the previous year, going down to the wire on the final day, the Inter of this year was unrecognizable from previous incarnations. In addition to the new signings, the meticulous Mourinho had managed to instil an understanding in his players of exactly what was demanded of them at all times during a match. On top of that his motivational powers are such that he has created a belief and togetherness in this side that had never been there before.

It can’t be overstated just how herculean an achievement it was to beat both Chelsea and Barcelona on the way to the final. At Chelsea, Mou instructed Eto’o and Goran Pandev to track back like defenders – and it stopped the Blues in their tracks, restricting their width and forcing them to play narrow and hit long balls. Against Barcelona, Inter were able to mark the world’s best player Lionel Messi out of the game, beat them 3-1 at San Siro and hold out at the Nou Camp with ten men. The first leg was all about team tactics, the second about inner belief.

In the past, Inter sides had always crumbled in Europe, as if convinced of being jinxed in the one competition that had eluded them for so long. They were somehow always less than the sum of their parts regardless of the annual millions thrown at the problem by their oil baron owner and President Massimo Moratti. But Mourinho changed all that and he deserves enormous credit for ending the 45-year hoodoo, even if he did alienate half of Italy on his way to doing so, for the endless verbal grenades he would regularly throw at rival clubs. Classic mind-games to help enhance the siege mentality within his squad.

And now he is Real Madrid-bound and when he arrives he will continue to polarise opinion. In the same way that Fabio Capello affronted his employers and supporters by deigning to win the Spanish title by drilling a win-at-all-costs mentality into his side, so Mourinho is bound to receive criticism for not always producing breathtaking football.

As Bayern Munich winger Arjen Robben said of the man he used to play for at Chelsea. “[Bayern Munic coach Louis] Van Gaal is a coach who wants to play nice football and win games that way, but Mourinho is a purer coach who has his tactics ready, but doesn’t think too much about playing football – or not about playing nice football, he just concentrates on winning games.”

The Madrid job is often seen as a poisoned chalice because winning the title and/or the Champions League while playing the beautiful game the way god intended is a minimum requirement. But given that Los Meringues have endured two years of Barcelona success, they will probably settle for even a scrappy piece of silverware – especially if it’s the trophy with the big ears.

If anyone can bring the best out of Kaká, Cristiano Ronaldo, Xabi Alonso et al it’s the Special One. He’ll probably be given licence to buy a raft of new players too . Either way, don’t hang around for him to sign for Real Madrid and buy a batch of defenders before backing them to win the Champions League next year. That 6/1 won’t last long.