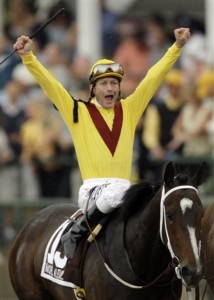 Bring all of the finest meats and fruits in the land, gather the most beautiful virgins, jewels and treasures, and make way for Calvin Borel, the royal king of all Jockey brethren… In the last four years, there isn’t a better Jockey on the planet. From now on, my betting formula on betting on big horse races just got easier, I’m taking the horse Borel’s riding, no questions asked.

If you’re wondering who the hell Calvin Borel is, you didn’t watch the Kentucky Derby and you probably don’t watch enough horseracing. Shame on you, but unfortunately, considering the state of the industry, you’re not alone.

Contrary to popular ignorant belief, jockeys aren’t midgets or dwarfs, they’re just small. FYI, in case you’re ever in a situation to have to fight a jockey, bear in mind they are incredibly strong, so watch your chin.

Even though horse racing isn’t as popular as once was, a winner is a winner, and around here, winners get their deserved props and hype.

Calvin Borel does two things. He rides racehorses and he wins. It’s as simple as that. Last year, Borel won the Kentucky Derby, switched up horses for the Preakness and then won that too. This year, he struts in on Super Save and wins the Kentucky Derby…again! Seriously, how much of a champion do you have to be win prestigious races over and over again? There’s only one answer to that question, you have to be Calvin Borel.

Calvin’s career hit benchmark status in July 2008 when he became just the 34th Jockey in North American Thoroughbred racing history to record 4,500 wins. He became legend when he became the first jockey to win the first two legs of the Triple Crown on two different horses. His peers know him as Bo-Rail, a nickname he earned for his signature super move of slipping up the rail to save ground, a move many will remember from the Kentucky Derby.

I’m not a jockey, I’m too big in the hips, but if I were a jockey, number one, I’d worship Calvin Borel. Number two, I’d be petitioning for him to be knighted, or at the very least a parade. I imagine Borel wakes up in the morning after a night of reckless sex with several women, he then probably heads straight to bathroom mirror just to remind himself what a true champion looks like, and then he pisses excellence and never flushes. Why? He doesn’t have to flush, he’s Calvin fucking Borel, that’s why.