Home / Poker / How playing Piquet can help your poker game 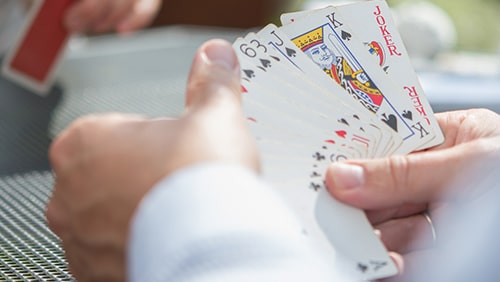 How can one of the oldest card games in the world can help you when it comes to playing poker.

Playing old card games can often feel like less of a step away from the neon world of online poker than ever before. People played with actual cards back then?

Part of the genius of piquet is judging which cards to keep and which ones to throw away, a very important part of the game of poker of course. Originating in 1535, Piquet is played with just 32 cards, with the cards from seven up to the picture cards in play. It’s a game where every card has value, however, as you’ll discover.

How to Play Piquet

Each player is dealt 12 cards face down so their opponent cannot see them. The remaining eight cards are placed in the middle of the two opponents, five on top and three below. The first player to choose chooses how many of the top five cards they would like to swap for cards in their dealt hand. Any cards they choose not to swap are then on offer to the second player, and the hands are then set.

The aim of the game is to score more points than your opponent across six rounds of action, with each player getting to go first three times. Each round, you make declarations and then pay out the cards you have been dealt in order to win tricks. There are a lot of points on offer, so it’s worth focusing on what you can do to earn them from the very start. If you don’t have a ‘Carte Blanche’ (a hand entirely free of picture cards worth 10 points immediately) then it’s onto the standard declarations.

Your first job is to declare a ‘Point’, or number of cards in one suit, the longer the better and the higher value the better if tied. However many points are in the longest declaration are scored, with no additions.

Then it’s declaring a ‘Sequence’ of cards in one suit, so as long a straight flush as possible. If you have one of three or four cards, it’s worth three or four points, but anything over five and you can add a ten on top, so a five-card sequence would be worth 15 points, a six-card sequence worth 16 and so on. The player who wins the Sequence section can add on any other sequences in their hand, but if neither player is superior, then no points can be scored, so it’s not a case of more sequences means more points if the best ones between players are equal.

Then, it’s a ‘Set’. Think of this as a set in poker, i.e. three cards, but it’s even better if it’s four. Whoever has the best one wins again, but this time, your best set must win the original declaration before any additional ones are declared. A set of three is worth three points, but a set of four is worth 14 points.

If you score 30 points before your opponent scores a single point, this is called a ‘Repique’ and is worth an amazing 60 points. However, this must be scored by you before the ‘tricks’ section; if you score 30 unanswered points from the declarations and then into the tricks section, then you have a ‘Pique’ and score an extra 30 points, very much worth having.

How to Win at Piquet and Poker

There’s no betting as such, but Piquet is often played for money and requires great skill in knowing which cards have the most value, both in terms of strength before playing tricks and during. You will eventually count up the tricks at the end of playing them out, with the final trick scoring you an additional point just for being the last one played. There are no trumps and you must follow suit if able to do so.

Whoever scores most tricks wins 10 points, and if you can somehow win all 12 tricks (nigh on impossible) you’ll score ‘Capot’, an extra 40 points.

Piquet and poker have a lot in common and while there’s no bluffing involved, building the strength of your hand’s declarations is vital and relies upon you working out what you’re up against too. At the end of six hands, your score and your opponent’s scores should be added up and the margin of victory determined by the difference between the two scores, but with an added caveat of the Piquet ‘Rubicon’ rule, which we’ll explain.

If, however, you were to score 150 points and your opponent only scored 90, they scored less than the 100 ‘Rubicon’ that is needed to avoid conceding by the score (in this case 60) +100 and + an extra 100 points for failing to make the Rubicon cut-off of 100 points. In that case, your opponent would owe you £260 by playing the same stakes despite only losing by 30 points extra.

Piquet is a tremendous game that relies on quick wits, the ultimate ability to adapt and that crucial skill in poker, knowing when to go on the attack and knowing when – and perhaps most importantly, how – to minimize your losses. If you’ve never played before, you can read the full rules right here, but we would encourage you to do so at your first opportunity.