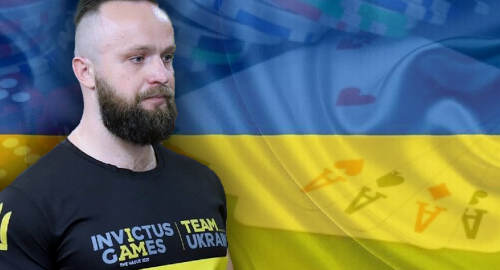 Ukraine’s new gambling regulatory chief is a former anti-terrorist soldier who represented his country at this year’s Invictus Games.

Last week, Ukraine announced that Ivan Rudy, a former member of the country’s Anti-Terrorist Operation (ATO), had been appointed the first chairman of the new Commission for the Regulation of Gambling and Lotteries.

Rudy (pictured), who reportedly beat out 20 other applicants for the job, will be tasked with overseeing the country’s new regulated gambling market, which will officially authorize online gambling for the first time. In addition to his military experience, a cabinet minister hailed Rudy’s “experience and knowledge in the field of management, international relations and finance.”

The Commission will ultimately feature seven members, two of which were also appointed last week. Attorney Olena Vodolazhko was reportedly chosen due to her experience assisting government in implementing new regulations, while former NATO liaison Yevhen Hetman got the nod for his experience inmanaging public and private enterprises.

Last month, Ukraine’s President Volodymyr Zelensky delivered a speech to parliament in which he repeated previous claims that legal gambling would contribute UAH5b (US$176m) to the state budget next year. Much of that sum will come via the first wave of licensing fees, but future revenue will depend on how high the country sets its new gambling tax rates, which remain undetermined to this day.

Meanwhile, as the country waits for government-sanctioned gambling, the unauthorized type continues to keep the authorities busy. Last month, the Kyiv City Prosecutor’s Office announced the bust of four separate gambling operations that provided access to computer terminals connected to internationally-based gambling sites. Police seized over 100 computers and other associated gear during the raids.

The authorities said at least one of these operators was among those shut down late last year after legislators declined to approve a draft gambling bill and President Zelensky ordered a crackdown on the illegal operators he suspected these legislators were attempting to defend.