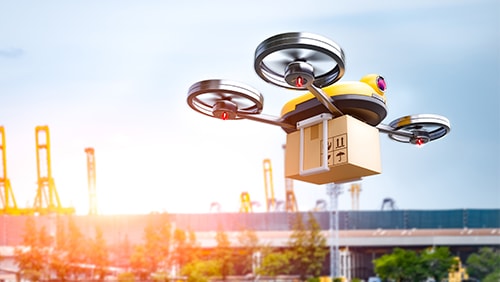 What you might be seeing in the sky isn’t a bird, it isn’t a plane and it certainly isn’t Superman. It’s most likely a drone and, soon, you’ll see more of them buzzing around over head. The idea of using drones to make deliveries of goods has gained traction over the past several years, and a number of pilot programs have already been implemented to test their feasibility. Amazon has been exploring the use of the flying autonomous vehicles to expedite shipping, pizza chains are ready to get in on the fun and Walmart has gotten involved, as well, launching a drone delivery program earlier this month. This latter endeavor is taking off, literally and figuratively, and the retail giant is already making deliveries using drones. This is only the beginning of a new era of commercialism, and everything anyone ever read in sci-fi novels is coming true.

Walmart announced this past Monday that it is now working with a drone delivery network, Zipline, to launch product deliveries in a first-of-its-kind program around its headquarters in Arkansas. It will begin by offering certain health and wellness products for delivery by drone and plans on adding more products once the program proves viable. When it launches, expected to begin early next year, Walmart’s drone delivery option is limited to just a 50-mile radius around its headquarters, and the products will reportedly arrive at the customer’s doorstep in less than an hour.

Zipline, according to the Walmart announcement, “began operating in late 2016 in Rwanda primarily focusing on the on-demand delivery of medical supplies. To date, they’ve safely delivered more than 200,000 critical medical products to thousands of health facilities serving more than 20 million people across multiple countries. This uniquely positions them for national-scale operations across the United States.”

With that being the case, and provided the trials go well, it is not inconceivable to envision a massive rollout of product-delivering drones taking place in just a few short years. Amazon and Walmart certainly have the wallets needed to facilitate rapid growth on a large scale and they both have the requisite customer bases to make it easier. Walmart hasn’t said how much it might charge for the delivery service, but, even at $5, it’s a win all the way around. There would be fewer vehicles on the road, cutting emissions substantially, customers get their products quickly and safely and Walmart continues its efforts to become greener.

Which streaming music service is right for you?
Erik Gibbs
21 December 2020

Drones now have an enemy: the counter-drone
Erik Gibbs
4 September 2020