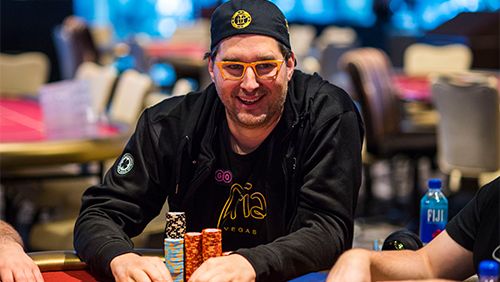 The first match of the new PokerGO series High Stakes Duel has seen 15-time World Series of Poker bracelet winner Phil Hellmuth get the better of Antonio Esfandiari to the tune of $100,000.

Billed as a new show that pits the best poker players against each other in a live heads-up duel until the loser either doubles or quits when the stakes get too high, the first match-up of the series saw Antonio ‘The Magician’ Esfandiari taking on Phil ‘The Poker Brat’ Hellmuth. On the line? A massive $100,000 and a whole lot of bragging rights.

High Stakes Duel has already got underway, and what an opening match it was. From the new feature of the ‘weigh-in’ (no actual physical weight recorded) this was always going to be a classic.

“Antonio is a great family man. He’s a great guy.” Said Hellmuth, teasing the Poker Brat punchline. “Everybody loves him, but he’s a primadonna on the set. There’s a reason I have all the bracelets.”

Fighting talk. However, Esfandiari has plenty of experience in actual fights, with his legendary bout against Kevin Hart providing white collar boxing fans with plenty of thrills last year. The smiling Magician – Esfandiari is a former member of the Magic Circle – was just as good at the verbal jousting.

“I haven’t been playing that much since quarantine,” Esfandiari admitted. “It’s really been two kids mornings and nights. But I’m playing Phil Hellmuth, so I really didn’t need to freshen up too much.”

Ouch! As well as the jovial needling, Esfandiari said that he would ‘never quit him’, meaning a challenge would come if he lost the first challenge.

“No matter what the stake, I’ll never quit him.” As he said. Here’s the full Weigh-In:

When the action kicked off, it was the former Big One for One Drop winner Esfandiari who got off to the best start. Two pair over two pair saw The Magician fill his boots. A missed straight draw cost Hellmuth again at showdown, and by the first break, Esfandiari had a 3:1 chip lead.

All over? Don’t you believe it – nothing is over when Phil Hellmuth is at the table.

In the second half, however, Hellmuth would come right back. A pivotal hand saw the 15-time WSOP bracelet winner go all the way to the river with a bottom-pair straight draw which didn’t catch the card it needed to overtake Esfandiari’s trips on the river. Despite hitting that card, Esfandiari folded to a massive raise from Hellmuth, which his enemy was ahppy to point out was the wrong move after the hand ended.

“All you had to do was call,” said Hellmuth as he started to take control. Switching his play to pre-flop, a series of aggressive all-ins put Esfandiari on the back-foot, before Hellmuth played ae-king like it was suited rags, trapping his opponent and forcing folds on the river once the pot was inflated enough.

Hellmuth had the lead, and when he raised with pocket sevens, Esfandiari felt like queen-jack was a shoving hand. He was all-in and, when Hellmuth made the call, at risk. Across the board, Esfandiari couldn’t catch, and the challenge was over…. for now.

Esfandiari declared his challenge to double the stakes and play a re-match against The Poker Brat. The pair will go head-to-head again for $200,000 as The Magician aims for revenge.

Hellmuth is bullish about his chances, and thinks it’ll be a High Stakes Duel for the ages.

You can watch the PokerGO premiere of High Stakes Duel right here: