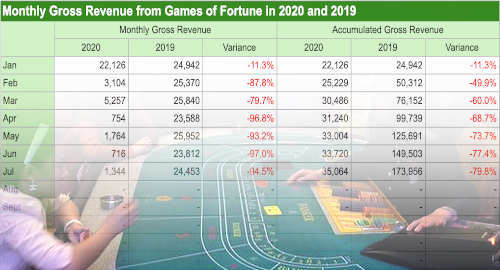 Figures released by Macau’s Gaming Inspection and Policy Bureau (DICJ) show the special administrative region of China’s casinos generated gaming revenue of MOP1.34b (US$168.4m) in July, down 94.5% from July 2019’s total, marking the 10th straight month of year-on-year declines. For the year-to-date, revenue is down nearly 80% to MOP35b.

However, the figure was nearly twice June’s record low sum of MOP716m, reflecting the modest bump in tourist traffic since China’s Guangdong province eased its COVID-19 restrictions that required individuals returning to the mainland to self-isolate for 14 days.

This week, a Macau representative in Guangdong told local media that Beijing authorities had signalled that the rest of China’s provinces would follow Guangdong’s lead by resuming the issuing of non-tourism travel permits starting August 12. Macau authorities subsequently said they have yet to receive confirmation of this report.

While this news would be welcomed by local casino operators, Hong Kong recently extended its Macau travel quarantine to September 7. And until China permits tourists to apply for permits under the Individual Visit Scheme (IVS) as well as authorizing group tours, analysts believe Macau’s gaming revenue will continue to post the kind of mind-boggling year-on-year revenue declines that would have been unthinkable at the start of 2020.

Macau casino operators have posted some truly grim numbers in their second quarter earnings reports, with Las Vegas Sands posting a net loss of nearly $1b while MGM Resorts lost $857m. SJM Holdings bucked this trend by losing only $182m while increasing market share at its rivals’ expense, based on its older, less flashier casinos having more appeal to local residents who only need to travel across town to gamble.