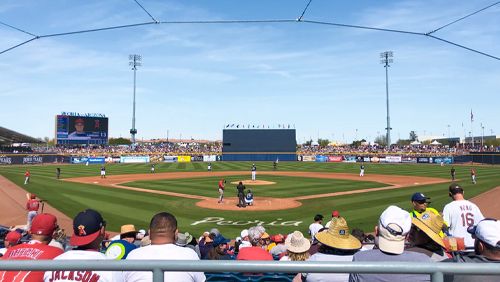 Just because baseball fans aren’t allowed to attend MLB games in person doesn’t mean they still can’t be seen at the games. Because of the coronavirus, MLB, and all other sports leagues, have decided that allowing fans to grab a seat at the games wouldn’t be a smart idea. This means considerable losses in revenue, as on-field advertising loses its purpose and concessionaires can’t sell their goods. However, teams across the MLB have come up with a novel, out-of-the-box solution that will allow fans to be seen at the games while, at the same time, recovering some of the lost revenue. Welcome to the world of fan cutouts.

The idea emerged earlier this month and has since caught the attention of several teams, including the San Francisco Giants, the LA Dodgers, the Milwaukee Brewers and more. The concept is simple – fans can submit a picture, pay a fee and the team will build a cardboard cutout of the fan to be placed in a seat during games. Each team has its own procedures and policies, but, for some fans, they will even be able to keep their cutouts and, should their virtual self be hit by a foul ball, will be sent a game ball as a keepsake.

Prices range drastically, some as low as $49 and some as high as $299. Just like with most ballparks, the difference in price depends on where the fan wants to be seated. Other clubs are restricting the sales to only season-ticket holders. The money generated from the sales could be substantial, too. The response has already high and, to use Oracle Park as an example, the return could be substantial. The home of the Giants has 41,915 seats; if it sold half of these at $50 (season-ticket holders get them for free), it could pick up over $1.04 million. That certainly isn’t enough to offset all the losses incurred by the lack of having beer-guzzling, popcorn-munching fans in the stands, but it’s better than nothing.

The Brewers are taking a slightly different approach. The team will place two-foot images of fans together with the “Last Row” statue of Bob Uecker located at the top of Miller Park. Uecker has been a game-caller for the club for 50 years and has been around baseball almost as long as the game itself. The cutouts cost $50, and the promotion sold out almost as soon as it was launched.

Brewers President – Business Operations Rick Schlesinger said of the initiative, “We miss our fans and wanted to come up with a creative way for them to participate in the action this year. While nothing can replace the energy and passion of our loyal fans in the stands, the Cutout Crew is a unique way we can welcome familiar faces for now at Miller Park.”

Across the world of sports, COVID-19 is forcing organizations to think outside the box in order to offset the economic hardships encountered. From piped in noise to robots and cutouts, the face of sports has been altered by the global pandemic. With the major sports action about to get underway again in the US – all leagues are going to start games anywhere from the end of this month to the beginning of September – there’s a lot to look forward to, even if the presentation will be a little unusual.