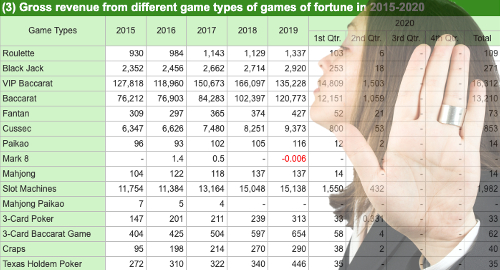 Macau casinos were the last place VIP gamblers wanted to be during the second quarter of 2020, according to the latest government statistics.

On a year-to-date basis, total gaming revenue (including lottery, sports and race betting) totaled just under MOP40b, down from MOP150b in the first six months of 2019.

VIP baccarat revenue totaled a mere MOP1.5b in Q1, also down 95.6% year-on-year. Mass market baccarat fell 96.4% to just over MOP1b. Both verticals were also shadows of their Q1 2020 selves, a period that featured around five weeks of pre-COVID activity.

Mass market gaming revenue (including slots) totaled MOP1.73b in Q2, down 95.5% year-on-year, but enough to maintain its market share lead (53.5%) over VIP, marking the sixth straight quarter in which VIP baccarat has taken a back seat to its less flashier cousin. VIP baccarat’s share of the overall pie slipped nearly two points from Q1.

Casino operators are praying for a reversal of fortune in Q3 following this week’s news that China’s Guangdong province was dropping its 14-day quarantine requirement for individuals arriving from Macau. Local officials said there were about 1,600 arrivals at Macau’s border checkpoints on Wednesday, around 60% higher than the day before.

However, Beijing has yet to authorize the resumption of issuing Individual Visit Scheme permits for mainland residents, leaving many analysts skeptical of any significant short-term rebound for Macau’s gaming revenue.

Gamblers who do choose to visit Macau casinos will be subject to COVID-19 testing both upon arrival and before returning to the mainland. Mandatory testing of frontline casino staff is also underway, although untested staff will still be allowed to work while awaiting their turn to be swabbed.

Macau’s downturn has similarly impacted the special administrative region’s crime statistics, as the Financial Intelligence Office recently reported 31.2% fewer suspected money laundering cases in the first half of 2020. The Office said the decline was primarily due to a decline in suspicious transactions at Macau casinos.