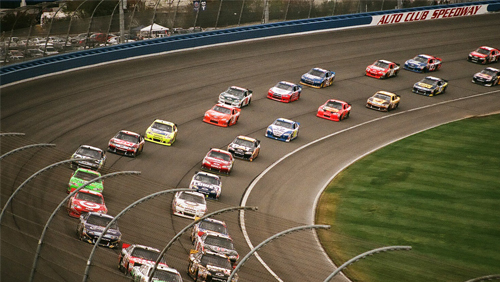 This year’s coronavirus-affected NASCAR Cup Series schedule has been very unusual, including a few tracks holding events on both Wednesday and Sunday. NASCAR is doing what it can to get in every single race that had been scheduled.

However, what will happen this weekend at Pocono Raceway in Long Pond, Pennsylvania takes the cake. The Cup Series will stage the Pocono Organics 325 on Saturday and then turn right around 24 hours later and run the Pocono 350. The only difference, obviously, being that Saturday’s race is 130 laps and Sunday’s 140.

Pocono is a 2.5-mile triangular track known as the “Tricky Triangle” and somewhat of a combination road course and oval track. It also used to annually host an IndyCar race.  In fact, it was designed by 1959 and 1962 Indianapolis 500 winner Rodger Ward. Turn 1 has 14 degrees of banking, Turn 2 nine degrees and Turn 3 six degrees. Each turn has its own nickname. The first Cup Series race held at Pocono was the 1974 Purolator 500 won by the legendary Richard Petty.

Saturday’s event has been in existence since 1982 and had been run at 400 miles since 2012 but was shortened because of the unusual doubleheader with Sunday. Jeff Gordon leads all drivers with four wins in this race.

Denny Hamlin (+600 to win Saturday) leads active drivers with five overall wins at Pocono as well as with a sterling average finish if 7.1 – rare you see a driver at any track with an average finish in single digits. Hamlin won this race in 2006 and 2010 when it was run at 500 miles (the 2010 one was extended to 510).

Hamlin also won the most recent race at Pocono last July, the Gander RV 400. Hamlin led twice for 32 laps, including the final 20. He was followed by Joe Gibbs Racing teammates Erik Jones (+2000) and Martin Truex Jr. (+700).

The defending champion of Saturday’s race is Kyle Busch (+500), also for Joe Gibbs Racing. Busch led a race-high 79 of 160 laps — including the final 21. It was Busch’s third career win at Pocono and second in a row at the time; he would finish ninth in the July 2019 event. Brother Kurt (+2000) also has three wins at Pocono, including this race in 2016.

This will be seven-time points champion Jimmie Johnson’s final weekend at Pocono, where he has three wins. He’s +2400 for Saturday. Kevin Harvick is the +450 favorite even though he has never won in 38 races at the track. That’s the longest such Pocono drought among active drivers.