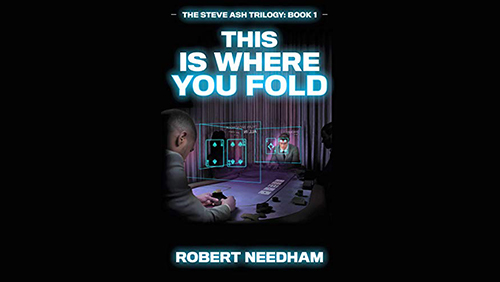 Poker and the printed world go together so naturally, it might impossible to think of a time where the two weren’t connected in some way; one intrinsically compliments the other, whether it’s a strategy guide or in reporting the drama from the felt.

In our series about poker books, we’ve covered classic reads from the past that helped your favourite players today form their own poker game, as well as recent strategic guides to help you succeed in specific areas of the game such as qualifying for tournaments through winning satellites, or how to tackle various levels of playing no limit hold’em tournaments.

There is always a place for poker in the literary world of thrillers, however, and while we’ve written in detail about poker making its mark in novels such as the Harry Bosch novels by Michael Connelly, it’s high time we brought you a poker novel that centres around the game entirely.

This is Where You Fold has been released with perfect timing, therefore, coming along just this Spring, published three weeks ago courtesy of Gutshot Publishing. The book centres around a poker player and former businessman called Steve Ash, whose comfortable life explodes in disaster when he loses his business to a cheating friend and is left to consider his options with two kids, a mortgage and a father-in-law who is in a nursing home. Up against the worst odds since Bryce Yockey moved all-in, Ash turns to his own technology, since he designed the card-reading tech at the poker table.

Desperate and in debt, Ash figures a way that he can read other players’ cards, giving him the perfect way to make his money back… if he doesn’t get caught.

The first thing to say about This is Where You Fold is that it’s the first in a series of poker novels by the author, Robert Needham, so expect to be left on the edge of your seat at the table and looking forward to more action. Whether Steve Ash survives or not we won’t spoil, but suffice it to say that as a reader, when you finish This is Where You Fold, you’ll be left wanting more.

The story is written really well and has an easy-to-read style that pitches itself between danger and description with a rounded style that makes you want to keep turning the pages. The danger element is there from the first paragraph, but this is explored in the world of poker, and crucially through the character’s eyes with a fine eye for detail.

It’s clear that Robert Needham knows poker and plays the game too. If you’re looking for a poker novel to read at the poker table, it’s the perfect size for it, at 210 pages. Available for just £1.99 on Kindle, we’d recommend it as your next poker book. The action strikes the perfect balance between characters you can sympathise with – or enjoy rooting against if they’re the baddies – and poker action which is believable as well as exciting.

Throw in a few silenced guns and covert operations all happening – quite literally – under the table and you’ve a recipe for a highly enjoyable read that will distract you from any bad beat. As bad as any hand at the poker table has gone for you, it could be worse… you could be Steve Ash!

This is Where You Fold is available right here in e-book format – dive into Ash’s world of danger and dealing his own fate.