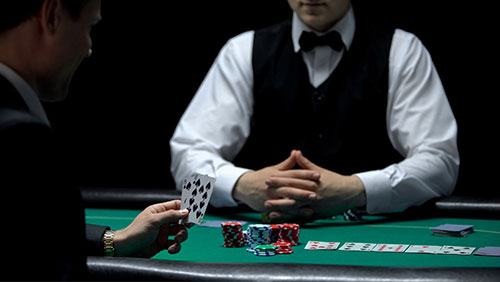 Poker may have moved behind closed doors for the foreseeable future, but Poker Twitter has always existed behind the computer screen and is no worse for the outbreak of Coronavirus. If anything, the COVID-19 has seen a resilience and humour from poker players and fans that much of the planet would do well to ape.

Plenty of poker players have been very receptive to fans questions, top 10 lists and much more. It won’t be a surprise to you that Daniel Negreanu is one of them. The Masterclass master and poker legend took to Twitter over the weekend to reply to this query:

Poker people, how old school are you? I'm ancient enough to remember:

That’s a very decent point about Full Contact Poker, and no sooner was it out there did ‘Kid Poker’ clear up any confusion.

170 million actually. Offer was made and accepted. Champagne was had, all that was letting was writing up the papers… then UIGEA hit. pic.twitter.com/wmRunQJK5l

Can you imagine? $170 million is the equivalent of enjoying a major, major lottery win a dozen times. We’d bet the champagne was consumed anyway, just not for the same reasons.

The impact of the UIGEA (Unlawful Internet Gambling Enforcement Act) bill being passed, almost under the table as it was when it was included in 2006 in the SAFE Port Act was pretty devastating, banning as it did “knowingly accepting payments in connection with the participation of another person in a bet or wager that involves the use of the Internet and that is unlawful under any federal or state law.”

It may have been five years later that Black Friday hit the poker industry in America like a cannonball, but the revelation that such a huge drop in potential earnings to one of the world’s biggest poker personalities is quite something.

The worst part of Negreanu missing out on that money is clearly that the same sort of offer is almost impossible to imagine happening again before inflation brings $170 million down in value. Negreanu may well have become an even bigger ambassador for the sport if the site, which specializes in the kind of blog posts that in many ways have gone out of fashion for poker stars to make, had grown bigger.

On the other hand, imagine a scenario where the ink did dry on that contract and Negreanu took home millions just days before the UIGEA bill hit others harder. He may have been ostracised by other players, shunned in some way for his fortune in securing such a windfall just as the balloon went up.

Either way, players are fascinated by Negreanu’s reveal about how close he came to an extremely big site purchase. It says everything about him that this hasn’t been something he rested on rather than constantly reinventing himself and enjoying the kind of career that he has.

If you fancy taking money off Negreanu, then you’ve got until the end of the month – by entering the GGPoker WSOP Super Circuit Series events until the end of May. Whether you want to rub it in or pay due respect to the man who is possibly the biggest face and name of the industry, what’s stopping you?