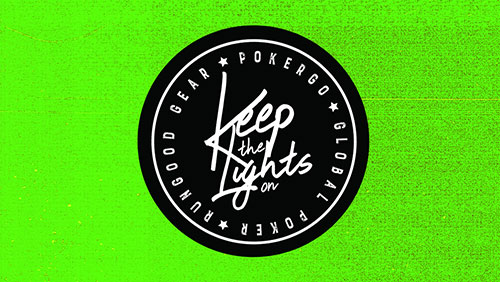 An initiative from Poker Central, Global Poker and poker clothing company RunGoodGear has been launched in order to ‘Keep The Lights On’ for freelance poker media from this Monday, April 27th.

The idea of the pledge-based charitable enterprise is simple – to raise vital funds for those who would otherwise be employed as freelance poker media during a time when there is no live poker upon which to report. From dealers to reporters, the World Series of Poker being postponed confirms one thing – poker media workers are going to have a lean few months.

In order to raise urgently needed funds, the initiative is offering to pay the utility bills of anyone working in the poker media, with those who believe they are deserving of some of the funds needing to submit their information by May 11th.

The Keep The Lights On streaming games will take place with three players striving to cash for each pledge, those three players being Jamie Kerstetter, Jeff Platt, and Brian ‘TheGoldenBlazer’ Frenzel. With the pledging site already open and available for donations right here, funds raised have already passed $14,500. Run Good Gear have already put together an information page about the idea.

“Poker Central is built on celebrating and elevating every single aspect of the game of poker, and in order to do that, we rely on the poker industry media to keep us all informed and tell the impactful stories that shape our industry. Our goal with this fund is to provide as much support as possible to those who have tirelessly supported when Las Vegas and the rest of the poker world was shining bright.”

As VP of Media Hayley Hochstetler and President Tana Karn of RunGoodGear said, “The freelance media are there when cards are in the air, counting chips on break, and typing up seating charts as last call is announced. The industry needs [them] to keep telling poker’s story when this is all over. This fund is to let you know we see you, and you won’t be left in the dark.”

If you can’t donate that way or won’t be able to sweat along with the stream, then you could do far worse than purchase the one-off special edition Keep the Lights On hoodie which is available from the Poker Central shop and costs just $50, with proceeds going directly to the pledge drive.

Each of the three streamers will take part in ten tournaments per day and play on Mondays, Wednesdays and Fridays from Monday April 27th to Wednesday May 20th, when the Keep The Lights On ProAM Qualifier will take place. Jeff Platt, PokerGO’s go-to presenter and voice behind the recent program on the channel called The Championship Run will begin his own run from tomorrow and kick off the fundraising. You can follow all the action on PokerGO’s Facebook page and every time a ‘champion’ cashes, a pledge will be donated.

There’s a competitive element in it for Kerstetter, Platt and Frenzel, with whoever ends up winning most qualifying for the All-Stars Pro-Am Live Event which is scheduled to take place at the PokerGO Studios in Las Vegas in December 2020.

Chad Holloway of PokerNews, Rob Kirschen from the World Series of Poker and Matthew Clark from the World Poker Tour are all helping to organize the nuts and bolts of the drive and working in partnership with Poker Central to get vital funds to poker industry professionals who are struggling to Keep the Lights On.

It couldn’t be better timing for many in the precarious position of not knowing when the next live poker hand will be dealt.