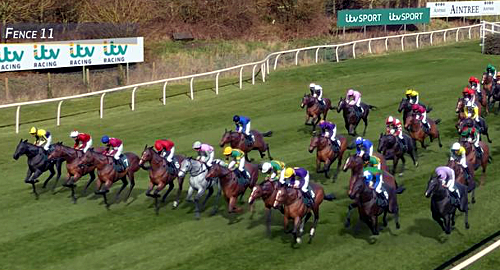 A total of 4.8m viewers tuned into this weekend’s Virtual Grand National broadcast on ITV, representing nearly one-third of all UK TV viewers at the time. Virtual nag Potters Corner – an 18-1 longshot – won the simulated horserace, which was put together by Inspired Entertainment using historical data, algorithms and CGI.

While the viewer numbers were only half of those that were expected to have tuned in had the real Grand National been allowed to run, it represented a more than six-fold increase over the 2019 Virtual Grand National ratings. This year marked the third year that ITV has aired a virtual race before the real deal.

With most other racing and sports events cancelled due to the COVID-19 pandemic, bookmakers were only too happy to offer wagers on this year’s Virtual Grand National. However, UK bookmakers offered to donate all profits generated from the event to NHS charities, rather than be seen to be taking advantage of punters in these trying times.

UK bookmakers Coral said the average bettor wagered a mere £2, which, based on the total sum raised for the NHS, suggests that the event attracted a significant number of individual wagers. Twitter stats showed the race topping the UK trending lists Saturday afternoon, with numerous users posting videos of punters either celebrating or howling in protest when frontrunner Aso stumbled on the penultimate hurdle.

Betting & Gaming Council (BGC) CEO Michael Dugher issued a statement saying the group was “overwhelmed with the public support” for the virtual race, adding that the nation was clearly “in much need of some light relief.”

BGC members are also donating profits from wagers placed in Ireland to Irish charities, including the Irish Red Cross. The BGC expressed hope that punters whose virtual wagers came in winners might choose to donate some or all of those windfalls to local charities.

Despite all the positive press, the real Grand National’s cancellation is estimated to have dealt a collective £500m blow to the racing and betting sectors, along with businesses in or around the racing track that will miss out on their seasonal activity bump.