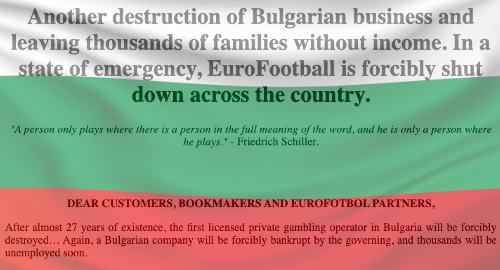 Bulgaria’s gambling regulator has suspended the license of bookmaker Eurofootball after concluding that the operator had failed to pay its necessary taxes to the state.

On Wednesday, Bulgaria’s State Gambling Commission (SGC) announced the temporary revocation of the sports and race betting licenses issued to Eurofootball Ltd. The revocation will last a minimum of three months, within which the SGC says Eurofootball must “take action to end the violations.”

Said violations involve Eurofootball’s apparent reluctance to pay taxes on its gambling revenue. The SGC claims that the company owes the state around BGN329m (US$182m) in unpaid taxes based on the company’s revenue over a five-year period ending in December 2019.

Eurofootball was among the Bulgarian gambling companies owned by Vasil Bozhkov, who was indicted in January on criminal charges including extortion and attempted bribery. Bozhkov, who was detained in the United Arab Emirates in early February, has denied any wrongdoing while fighting Bulgaria’s efforts to extradite him to face the music.

Eurofootball issued a statement saying the suspension of its license threatened the jobs of its 2,300 local employees. The company said it “has always paid the due state fees” required by law and warned that it would be “forcibly destroyed” by the government’s actions, which included the blocking of its financial accounts on February 21.

Eurofootball’s statement accused the state of seeking to create a land-based betting monopoly for the state-owned Bulgarian Sports Totalizator. Eurofootball claimed that the coronavirus-related shutdown of retail betting and casino operations ordered by the government earlier this month “do not apply” to the state-run Totalizator.

Eurofootball, which says the freezing of its accounts has prevented it from paying its customers around BGN420k, reassured its customers that “this is not goodbye” but “goodbye – until the next round.”

Bozkhov also operated National Lottery AD, the country’s largest privately-run gambling firm, the operations of which were ordered to be wound down following the government approving a ban on private lotteries. This month, sports betting tech provider Kambi announced that it was suspending its sports betting service with National Lottery AD after the latter firm relinquished its license.