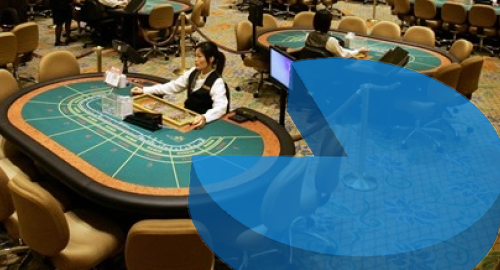 Macau casinos’ operations may slowly be getting back to normal but their financial performance is expected to be anything but normal for the foreseeable future.

On Thursday, Macau’s Gaming Inspection and Coordination Bureau (DICJ) announced that around 5,400 casino gaming tables – representing 80% of total market capacity – will be operational as of Friday. That’s up from just 46% a little over one week ago, following last month’s reopening of casinos after the mandatory 15-day COVID-19 coronavirus-related shutdown.

Despite the positive momentum, the gaming tables are still operating under the new restrictions aimed at minimizing further viral spread, and analysts expect March casino gaming revenue could fall as much as 80% year-on-year based on the sector’s performance through the first half of the month. Macau’s casino gaming revenue fell 88% year-on-year to MOP3.1b in February, the largest drop in the market’s history.

On Thursday, Macau’s Executive Council projected that the local government’s share of casino gaming revenue could total MOP130b (US$16.26b) this year, roughly half the sum the government had forecast in its 2020 budget before the COVID-19 crisis began, although still a modest increase from 2019’s MOP112.7b figure.

The government, which is tapping into its extraordinary financial capital reserve to help offset the revenue decline, now expects to run an annual deficit of around MOP39b due to lower revenue and increased expenses from virus-mitigation efforts. The expected deficit is lower than the MOP48b estimated by some analysts.

The situation could still worsen, especially in light of recent reports of new COVID-19 cases leading to new restrictions on the entry of foreign tourists, with exceptions – for the time being – for tourists from Hong Kong, Taiwan and the Chinese mainland (except those from Hubei province).

Of Macau’s 39 functioning casinos, all but two – Casino Taipa and the Macau Jockey Club casino at the Roosevelt Hotel – have reopened following February’s shutdown and the two venues have been granted an extension to the 30-day post-shutdown period in which all casinos were required to resume operations.