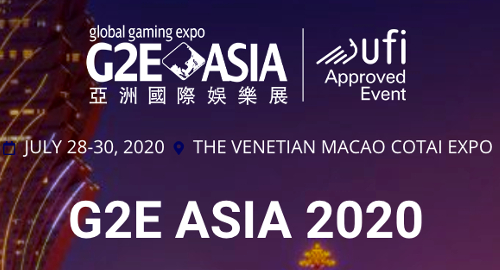 Organizers of the Global Gaming Expo (G2E) Asia in Macau have postponed the event by two months due to the ongoing coronavirus crisis.

On Tuesday, the G2E Asia event’s promoters, the American Gaming Association (AGA) and Reed Exhibitions, announced that the 2020 event originally scheduled to take place at the Venetian Macao casino during May 19-21 had been postponed to July 28-30.

The official announcement said the organizers had been monitoring the global health crisis sparked by the spread of the COVID-19 disease and that its “top priority is ensuring a safe environment” for its staff, exhibitors and delegates. The decision to postpone was made “out of an abundance of caution” and following consultations with both exhibitors and the Macau government.

The organizers vowed to distribute a “supplement agreement for our cooperation” around one week from Tuesday. Further updates will be issued as they become available.

The organizers apologized for any inconvenience caused by the delay but noted that the “travel and commercial restrictions” related to the outbreak made proper preparations “too difficult to hold the show” as originally scheduled.

Those restrictions have indeed been limiting, not just on conference organizers. On Tuesday, the Macau Daily Times reported that the Macau International Airport had only 11 routes in operation, and most of those were being operated by local carrier Air Macau.

At present, 24 international airlines had cancelled all flights in and out of Macau for the entire month of March, with no guarantee that full service will be resumed come April. The Hong Kong-based Cathay Pacific has put nearly 80% of its 25k staff on unpaid leave as most of its fleet is now grounded.

In February, organizers of the ASEAN Gaming Summit announced that their 2020 event in Manila originally scheduled for March was being pushed back until July 28-30, the same period in which G2E Asia will now take place.

Macau’s casino market has been struggling following travel restrictions imposed by China in mid-January, as well as the Macau government-imposed 15-day shutdown in February. Macau’s February gaming revenue suffered a record 87.8% year-on-year decline and expectations are that the March decline could be as high as 70%.