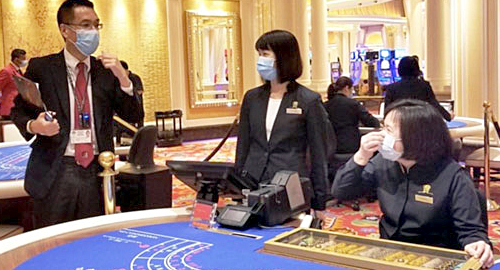 Macau casinos reported gaming revenue falling nearly 90% in February after local authorities ordered a two-week shutdown of operations due to the coronavirus.

Figures released Sunday by Macau’s Gaming Inspection and Coordination Bureau (DICJ) reported that local casinos had generated revenue of just MOP3.1b (US$386.6m) in February, a drop of 87.8% from the same month last year, the largest monthly decline on record. For the first two months of 2020, gaming revenue is down by nearly half to MOP24.9b.

The special administration of China ordered its casinos to shut their doors for 15 days starting February 4 as the COVID-19 outbreak continued spreading out of its ground zero in Hebei province. China restricted the number of individual visit scheme (IVS) permits and tour groups to Macau, while Macau’s government mulled shutting its borders entirely to limit its potential exposure to COVID-19.

Following the conclusion of that shutdown period, Macau casinos began phased re-openings and the DICJ said Friday that only two casinos – Casino Taipa at the Regency Art Hotel and the Casino Macau Jockey Club in the Macau Roosevelt Hotel – had yet to resume operations.

Operators were allowed to open only if they agreed to follow certain restrictions aimed at limiting further spread of the virus, including maintaining empty seats between players at gaming tables and electronic gaming machines, not allowing ‘standing’ bets and requiring all guests and staff to wear face masks until March 22.

Macau’s January revenue fell 11.3% year-on-year after China’s travel restrictions began taking effect in the final 10 days of the month. The disruption over the past two months robbed casinos of their annual windfall from the Lunar New Year holiday.

Casino operators took a major financial hit from February’s shutdown, with many operators citing daily expenses of $2.5m – $3m, primarily from the costs of paying staff. With the COVID-19 crisis far from over and other Asia-Pacific countries affected by the virus restricting their own citizens’ ability to travel, the long-term impact on operators’ bottom lines remains anyone’s guess.