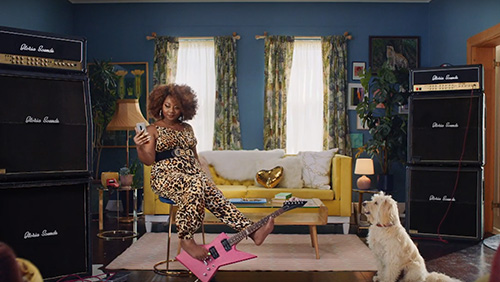 The first of four ads (available here) stars Paisley Billings from TV show, Tattoo Fixers, as Gloria and features the character playing Gala Bingo on her phone whilst simultaneously shredding an electric guitar solo… using her feet! Inspired by Gala Bingo’s seamless and exciting gameplay, this advert (named ‘Toe Jam’) and the remaining three will encourage watchers to ‘bingo like a boss’ whilst outrageously living life to the full.

Supporting the TV ads, which run from 24th February to 16th March, is a digital campaign, as well as continued sponsorship of ITV’s The Chase and Channel 5’s iconic Aussie soaps, Neighbours and Home and Away, displaying Gloria’s ‘boss-like’ adventures both at home and down under.

With the aim of disrupting the category and inviting a new younger audience to experience the online game, the introduction of Gloria adds a fresh, modern edge to the brand, whilst maintaining relevance with its existing players. This is just one facet of Gala Bingo’s rebrand which includes an updated logo and tone of voice, a cleaner, refreshed look and colour palette, and a new approach to digital.

The commercials and digital content were directed by Los Angeles based comedy director duo Fatal Farm, while the campaign is being overseen by advertising agency, Antidote.

Karina Adrian, Head of Brand Marketing at Gala Bingo, said, “We wanted to mix up the category and refresh our brand. We are a brand with significant heritage and branding that has stood us in good stead, however the time felt right to revamp and refresh, bringing us in to the roaring 20’s and with Gloria’s help, this truly integrated campaign certainly does that. We want to show a younger audience how fun and exhilarating the game can be, showing there is something for everyone. We’re really excited to unleash Gloria on the nation and bring the sass to bingo!”

The first TV ad can be viewed here: