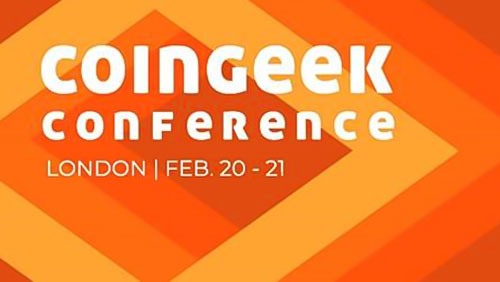 London, 18th February 2020: Since the last CoinGeek Conference (Seoul, October 2019) Bitcoin SV now has consistently more transactions than BTC and with the recent Genesis upgrade has almost limitless scalability…BSV currently has the record for largest blocks mined on public. The conference will highlight the stunning growth of the Bitcoin SV (BSV) ecosystem, the fastest growing blockchain ever, and its ability to enable enterprise applications for banking, gaming, social media, supply chain, healthcare, artificial intelligence and more.

As a result more than 800 delegates will be heading to Old Billingsgate in London to hear the likes of globally renowned economist and author George Gilder, Fundstrat’s Tom Lee, Swiss National Bank’s Thomas Moser and Wikipedia Founder Jimmy Wales all with differing opinions and visions for the future of blockchain technology.

We will also have presentations from BitCoin creator Dr Craig Wright, Cryptographer Ian Grigg and many others who are building solutions on the Bitcoin SV blockchain right now. Both days will be hosted by the irrepressible Jimmy Nguyen, Founding President of the Bitcoin Association.

If you can’t make it to London you will miss Calvin Ayre’s after party but you don’t need to miss any of the speakers. The live stream will be open for business in both Chinese and English on the CoinGeek London homepage.

Why Should I come to CoinGeek London?

CoinGeek Conferences are designed to ignite the growth of Bitcoin SV. Our events educate attendees about the unique technological capabilities of the Bitcoin SV blockchain, such as fostering business relationships to grow the real Bitcoin ecosystem, and bring together the global BSV community.

Dr. Craig Wright, Chief Scientist of blockchain research and development firm nChain, is Bitcoin’s creator, Satoshi Nakamoto. He is a key leader of the Bitcoin SV ecosystem. Dr. Wright is a regular attendee of CoinGeek Conferences, and this is usually one of the best opportunities to know the latest on Bitcoin straight from the man himself.

CoinGeek London is one of the most important bitcoin conferences this year because it comes at the heels of the Genesis Upgrade, which returns Bitcoin SV to the “Satoshi Vision” for Bitcoin. It also comes two months or so before the next “halvening” of Bitcoin so this is the best place and time to get to know the latest developments in the field and their impact in various industries.

What Is Bitcoin SV (BSV) and why does it matter?

Bitcoin Satoshi Vision, or Bitcoin SV and BSV, is one of the three main competing Bitcoin projects. The others are Bitcoin Core (BTC) and Bitcoin Cash (BCH).

BSV is the Bitcoin meant for business and the blockchain that all enterprises can build upon. Why? Because it’s the only protocol that’s set in stone, making it stable. It is also the only Bitcoin – and, indeed, perhaps the only digital currency – that can scale for use in business and trade.

BSV is also regulation-compliant and law-abiding. BSV seeks to work within the boundaries of reasonable regulation and wishes to minimize its use for illicit activities. BSV is the only bitcoin that has a clear roadmap to be the world’s new money and global public blockchain for enterprise.

What are some real-world applications of Bitcoin SV?

BSV’s potential is already being realized. Some sample projects include:

• Institutional exchange DRIVE Markets in Canada is building a payments network on BSV.
• American online game company Kronoverse is using BSV’s greater capacity to record game battle data to the blockchain.
• UNISOT in Norway is a start-up creating a supply chain management solution on the BSV blockchain.
• Streaming service – where you get paid for content with Streamanity…
• …or like Twitter but, again, you get paid for likes and content with Twetch.
• They even store weather data on the BSV blockchain right now with WeatherSV.
• Korea has Buskon, which allows listeners to gift music artists with tokens. It is the first enterprise-level app developed in the BSV blockchai